My Name Was Hussein 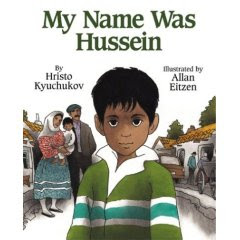 “My name was Hussein” by Hristo Kyuchukov tells a story about a boy who has to change his name because of a war that is going on in his country, Bulgaria. Hussein and the rest of his family are getting ready for Ramadan, a very important holiday for Muslims. Hussein loves to visit his grandparents on holidays. But one day, during the preparation for Ramadan, something happened. An army came, equip with tanks and cannons, to take over the land. Everyone in the country, including Hussein, could not visit their family. They were not allowed to go outside at night and they were not allowed to speak their native language anymore. They also had to change their names. Hussein did not want to change his name; his name means handsome. He was very saddened by the fact that he had to change his name.

This story touched me in many ways because Hussein’s family, his culture, and his village are being taken away from him. The title is what really caught my attention. The word “was” stuck out to me. I wanted to know what story was behind the word “was.” This story includes a large amount of Bulgarian and Indian culture and traditions that can be very useful in the classroom.

This book can be used in many ways in the classroom. For literacy, I would have the students write a journal entry explaining how they would feel if they were forced to change their name, if they could not see their grandparents, or speak their first language.
This is a great book to introduce the many traditions of Indian culture. For art, I would have my girls draw the outline of their hands on big white paper and have them paint it a pattern, to represent the henna art. For my boys, I would have them draw, paint, and color a pair of pants, a shirt, and a pair of shoes, to represent the clothes that they would wear for the Ramadan holiday. There will be plenty of discussions about this book in the classroom. We could discuss the things about the army, the officers, etc.

This book covers three levels of social justice education. Self love and acceptance are shown because Hussein, clearly, loves himself and doesn’t want to change his name. The story demonstrates how people do not respect each other. However, this story tells us what really happens in those countries. This story is giving us a little boy’s perspective of the whole ordeal. Racism and classism are explored in this story because the army is attacking this particular village and these particular people. Unfortunately, the last two levels of sje are not included in this story. I wish they were there is so much that can be done about this social issue.
Posted by Rachel Mogavero