Title: City Green
Author: DyAnne DiSalvo-Ryan
Grade Level: 1st-3rd grade
Buy it here!
Resources
Summary: City Green is a story about a girl named Marcy who lives in the city. There is an abandoned building across the street from Marcy's building that eventually was knocked down by a bulldozer. Witnessing this act, Mary and her neighbors now live across the street from an empty lot that is collecting garbage as time passes. Marcy does not like this and decided she wanted to do something about it. Miss Rosa, Marcy's neighbor, helps her get together a petition to rent the vacant lot that costs one dollar. The petition was signed with plenty of names, so Marcy and a group of people from their block take a bus to city hall and rented the lot from the city that same day. Everyone in the area helped cleaned up the garbage that was in the lot. With the help of everyone, the vacant lot turned into a beautiful city garden with lots of hollyhocks, daisies, peppers, lettuce, strawberries, and even sunflowers from a neighbor who at first was against building this garden.
Element 5: This book is a an example of Element 5: Raising Awareness because Marcy got the entire neighborhood together to witness the vacant lot that was only being used to collect garbage. With the help from everyone, Marcy was raising awareness and got the vacant lot now changed into something that can be used by everyone in their neighborhood- a city garden. This book is great for children because it shows how raising awareness can make change in something. It is an excellent example on showing children how people can work together to create change.
Activity: I would use this book to teach children that they can raise awareness about something they do not like. I will explain to them that Marcy rose awareness by getting a petition together that stated she wanted the lot rented. She got many people to sign her petition and the end result was that the vacant lot that was once useless is now useful to everyone in their neighborhood. I will take the students on the grounds of the school and look for an empty spot that can be changed into something such as a school garden of flowers. I will help my students come up with a petition that says they want this spot to represent "Our School Garden." The petition will explain how each student can plant a seed to represent the students in our school. The children will go around to each classroom explaining the petition and why they want to create a school garden. After the petition is signed from students and teachers, I will take my class to the school principal and explain how we want to create a school garden on a spot where nothing is being used. As a follow up activity, I ask the students to write in their journals about something they want to raise awareness about and then have volunteers read aloud what they wrote in their journals and form a classroom discussion.
Posted by Unknown No comments: Summary: The diary of Anne frank is a story of a young Jewish girl that goes into hiding with her family because of the Nazi invasion during World War II. The Franks’ and another family lived in hiding for two year in hidden rooms above her father’s office. The hidden rooms are referred to as the secret annex. Miep a family friend would sneak food into the secret annex for the family. It was in hiding that Ann Frank wrote about her thoughts, fears and feelings about the war. Ann Frank was robbed of her youth, the Nazis discovered the secret annex and everyone was sent to concentration camps, Anne Frank was sent to Auschwitz one of the worst concentration camp during World War II. After the war Anne Frank’s dad was the only survivor of the family, Anne Frank's diary was published after World War II.

Element 3: Anne Frank : The diary of a young girls fits well with element three because it presents a different side of World War II, it is depicted through the eyes of a young Jewish girl who grew up during the war. It displays the history of World War II and shows how the Nazis persecuted the Jewish people because of their religious beliefs.

Activity: A follow up activity would be first to take the students on a field trip to the Anne Frank center in New York City have them participate in the educational program that is offered. The students would then write a letter to Anne Frank and express what they have learned by reading her diary, their feelings about World War II and how the Jewish people were treated. In class there could also be a discussion about "religious intolerance" and if it still exists today, there could also be a discussion on human rights.

This Is the Dream 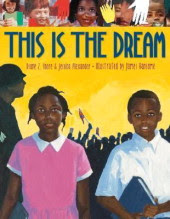 Summary:  This book is about how the world was such a segregated place. It took us through a time line that “colored” people had to experience simply because of their skin color. Separate fountains, sitting in the back of the bus, color specific restaurants, separated sections in the library, and separated seats in classrooms are some of the things African Americans had to unfortunately experience. The book then begins to show some hope and presents the steps people took to make a change in the world. African Americans did everything to stand up for themselves, including protesting. Some leaders that had powerful voices that made a change include Ella Baker, Walter White, Thurgood Marshall, and Dr. Martin Luther King. These people have made a difference, and by the end of the book, color did not matter anymore. Fountains were shared, it didn’t matter where you sat on the bus, there were no rules for restaurants, libraries did not have any segregated rooms, and everyone was treated equally in a classroom. It took some courage for them to go through these hard times and make a change in the world forever.

Element 3: Exploring Issues of Social Injustice: This Is the Dream really showed the history of racism. African Americans were not treated correctly simply because of the color of their skin. They had a rough time living through racist remarks, actions, and other horrible events just because they were dark. The book really showed how they were unequally treated before the civil rights movement, and this brought courage and motivation to some people who began to protest, and make their voices heard. This issue of racism was really big, and the passion for change was in the air. Thanks to a dream of equality, we are now a diverse world that lives to treat others equally.

Activity: An activity I would hold with my students is to have them sit in groups of 5, and give each group an index card with a racist action that occurred to African Americans years ago, such as having separate fountains, sitting in the back of the bus, etc. Each student will receive a sheet of paper with questions listed on it pertaining to how they would feel, and what they would do if they were in that situation, and what they would do to make a change. They will silently answer the questions, and then we will hold a discussion on what racism is, and why it’s wrong.

Posted by Georgette Mbayed No comments: