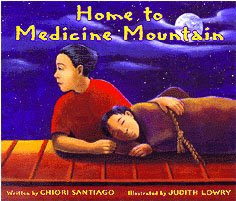 Summary: In the 1930s young Native American children were taken from their families and forced to attend boarding schools, far away from their homes.  While the schools would pay for the students' train fare in order to go to school, they would not pay for their trip back home.  Unfortunately, many families could not afford to pay for the trip back.
This story is about the struggle, determination, and longing of two boys trying to get home on their own.  Benny Lee and his brother Stanley disliked school.  They couldn't stand how the uniforms they were forced to wear scratched their bodies and made them itch all over. They hated how the hard leather shoes they wore kept them from the comfort of the earth in between their toes.  They wished for the day to go back home to their grandmother's house and here her tell stories about the bear spirit that protected the people of Medicine Mountain.
When the summer came some students were able to go back home to their families, but those that couldn't afford the train fare would have to stay at school and work.  Benny Lee and his brother were not one of the lucky ones.  However, this did not keep them from missing their home.  One night the two boys escaped from school and rode on the top of boxcars all the way back to Medicine Mountain.  Though they were eventually forced to go back to school, the brothers now knew the way back home and would never let distance stand in the way of their families.

Reflect: This story really touched my heart, especially because it's a true story.  What really inspired though me was that the illustrator of the book is Benny Lee's daughter.  He had told her this story and she decided to share it with the world.

Use in the Classroom: I could see myself using this book in order to help students write about important people in their lives or events in which they are not the main character.  This story could also be used to begin a unit on family, and how different people value the importance of family.  This could also be used to talk about illustration and the value that pictures play in texts.

Stages of Social Justice:
Exploring issues of social justice:  Benny Lee and Stanley's story dealt with the struggle that young Native American children had to face.  This was a form of segregation that effected many lives and has had numerous repercussions on generations afterwards.
Posted by Rachel Mogavero