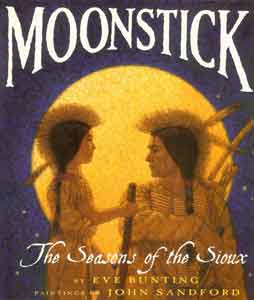 Summary:
This book describes how the Sioux Indians used a Moonstick as a type of calendar, marking a notch on a stick for each of the 13 moons of the Sioux year. Each moon marks an important change in nature, such as the time when buffalo give birth to calves, which usually indicates an important event in the culture. For the narrator, an unnamed Sioux boy, the moons mark the time that must pass before he can hunt, dance, and wear snowshoes like his father and older brothers. Each of the 13 moons is described as a notch is added to the illustration of the moonstick, with a short poem-like description for each season. In the end, the reader is brought to a more modern time, and the Sioux boy is now an old man that lives in a town and sells headdresses and beadwork, while his brother works in a barbershop. It is a sudden and drastic change from the rest of the book, which depicted the Sioux in traditional dress and activity. The pictures on the last two pages show farms, roads, telephone lines, and tractors, revealing that within the man's lifetime, there were drastic changes. It seems as if the traditions and culture of the Sioux are gone, until the last page when the old man passes a Moonstick to his grandson, showing that tradition can live on, even if the world around them is changing.

Review:
I thought this a beautifully written and illustrated book that provides a sensitive and truthful view into the Sioux culture. The book seeks to show that although ancestral traditions have passed, there are ways to continue learning and carrying on traditions. As the father of the young narrator notches a moonstick at the beginning of each of the 13 moons of the Sioux year, and the boy notes his father’s words. The father observes philosophically that "life cannot be without sadness," for buffalo or for Sioux when discussing the hunt, which foreshadows the ending of the book. At one point, when the boy notices the land covered in snow, his father says, “changes come and will come again. It is so arranged.'' Soon it is time for a new moonstick, but then the book jumps to the boy as an old man, wearing more modern clothing, and the reader realizes that many moons have passed. Throughout the book, traditional Sioux dress and decoration are depicted for each event as the speaker celebrates the activities and ideas proper to each month. The two final pictures are a bit unexpected as it goes from a traditional depiction of Native Americans, wearing headdresses and living off the land, but the end shows the young boy, now an old man, in present day, with the words, "Many winters have passed.” He now lives in town and does not hunt. At first, this was very saddening to see, as the man looks out the window and explains how his culture is gone, but it is more uplifting when the narrator takes his small grandson to cut a stick, to pass on his father's wisdom and note that changes will come again. This really made me think about how important it is to carry on tradition, and also how sad it is that many people don not realize that Native Americans still live today, although small in population, they are part of the present. This book makes that connection and brings awareness to the changes in our country that greatly impacted the Native Americans way of living and the existence of their people.

Activities:
I think this book can be used across a wide range of grades because it sparks many questions and gives rise to different interpretations and ideas. The language and writing is simple, although there are several Native American words and ideas that mat be explained, but overall, I think students can read, listen to and appreciate this book. It can be used to introduce the Sioux culture and learn about traditions and special events they celebrated, such as when a boy is old enough to hunt.
This can also lead into discussions about what happened to the Sioux Nation, and why the changed occurred at the end of the story. The students will explore the reasons for the decrease of the Native American population and how colonization, westward expansion, and industrialization affected their lives.
Students will interview a Native American, or have a speaker come in to discuss their culture and history. The students can research and write letters to organizations to support Native American reservations and their communities. They can organize a rally or protest during elections or meetings about laws and acts involving Native American or other groups they know about that have been treated unjustly.
The students can think about their own cultures and research traditions of their ancestors through books, oral histories and interviews. They can make connections to their cultures by learning about which traditions are no longer observed and which traditions they still carry on.
The book can also provide insight into different calendar systems. The students can learn about different calendars and create their own based on the changes they see, or important event in their lives.

Domains of Social Justice:
1) Self-love and Acceptance: Student of Native American background may identify with the story and the changing of their culture, while other students will learn to appreciate their ancestral culture and traditions, and connect the traditions they follow with their ancestors.

2) Respect for Others: Students will learn about the Sioux nation and discuss their traditions and beliefs presenting in this book. They will learn that the Sioux were one of the many Native American tribes that inhabited the land we live on today, and they have a rich culture to share.

3) Exploring Issues of Social Justice: Students will discuss what happened to the Sioux Nation, as well as other Native American nations and tribes. They will discuss how racism affected the Native American population, and how European settlers and white pioneers sought to “reform” and oppress these indigenous people.

4) Social Movements and Social Change: Students will learn how Native American resisted oppression and fought to stay on their land. They will learn about laws that took land away from the Native Americans, as well as recent laws that have tried to counteract these now that the U.S. has realized the impact of their actions.

5) Taking Social Action: Students will be able to meet and talk to a Native American that is active in changing the laws and proving for his community. They will learn more about what types of laws there are, and what people can do to support Native American communities and reservations to help their society thrive. They can write letters provide support in other ways, not only on issues regarding Native Americans, but also other cultures that they have researched and found that their people are being oppressed.
Posted by Rachel Mogavero