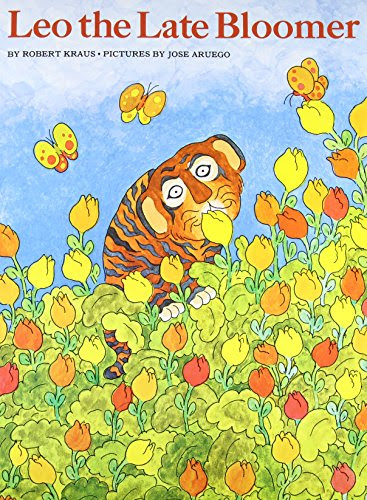 
Summary: Leo is a tiger that cannot do anything. He can't read, write, draw, speak, nor eat properly. His father asks what was wrong, but his mother says that Leo is just a late bloomer. The father watches Leo, but he still sees no progress. After the mother told him that a bloomer cannot bloom when being watched, Leo's father stopped watching. Then one day, Leo was able to read, write, draw, and eat properly. When he spoke, he said a whole phrase. "I made it!"

Reflection: I liked this book because it was so simple, yet it had a strong lesson to it. The pictures told a thousand words, even when there were actually only a few words on the page. The tiger looked sad while all the other animals looked like they were "normal" and they were able to do the things Leo couldn't. I think the book works for all grade levels, which is one of the reasons why I like it so much.

Activities: It was hard at first to come up with activities from such a "simple" book, but when I looked into it more deeply, I realize that there are a few things I can do with it. Students can make a list of answers to the following questions: Do you remember the first time that you ___? (walked, talked, wrote, drew, etc.) If so, how did it feel and when were you first able to do it? Have students share and then read the book. After the story, ask students if they have ever made a judgment on someone based on when they did something that they felt was slower or faster than someone else (the rate of development). Then have students respond to the story - did they think Leo would ever bloom? How do they think he felt when he could not eat as nicely as all the other animals? Have a class discussion. In addition to this discussion, the teacher can talk about how everyone inherits genes and characteristics from their parents. Put an emphasis that everyone grows and develops at a different rate and that it is important to respect each other for that.
Another activity is to ask students to picture people with disabilities and those who are physically disabled or even blind and deaf. Discuss physical and developmental challenges and be sensitive to all. Have students develop reasons for accepting people for their characters and not appearance. Help them understand why it is important to accept for what is on the inside rather than make judgments for what they see on the outside. Make a chart and segway into respect, diversity, and tolerance in the classroom.

Social Justice Domain:
1. Self-Love and Acceptance : Students learn to love themselves for who they are. They will understand that it is okay if they are growing at a different rate than someone else.
2. Respect for Others: Students learn that in addition to accepting themselves, they have to tolerate others. It is not the appearance that they need to accept, but the characters of the people and who they are.
3. Exploring Issues of Social Justice: Students will explore the meaning of the rate of development and confront forms of oppression that occur, such as bullying someone for being "slower" or "shorter."
4. Social Movements and Social Change: Students learn how they can help one another by learning that classroom behaviors towards one another will help one another learn. They will learn to speak up against those who look down upon late bloomers.
5. Taking Social Action: Students can teach others about the importance of accepting one another for the way they are because everyone is different, and everyone has a different rate of development. When they see someone being teased, for example, they will speak up.
Posted by Rachel Mogavero