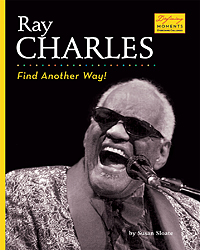 Title: Ray Charles Find Another Way
Author: Susan Sloate
Grades : 2-6
Element 4: Social Movements and Social Change
To Purchase Book Click Here
About Author Click Here
Summary
Ray Charles is the main character of the biography titled “Ray Charles Find Another Way” by Susan Sloate. Ray Charles is mostly known as a world-renowned singer, composer, arranger, and instrumentalist who also played the piano, saxophone, clarinet, and organ. Charles is also a member of the Rock and Roll Hall of Fame. However this book introduces Ray Charles as a civil right leader. Ray used his music to assist in the Civil rights movement. When he was informed by his Promoter that some his audiences were segregated Ray refused to perform. Ray thought it was wrong to force his African American fans were to sit in the balcony while his white fans occupied the best seats in the house. Ray was one of the first performers black or white to challenge Jim Crow and other unfair laws. This book shows Ray was a fighter even as a child. At the age of 7 years old Ray turned blind from a disease that attacks children. Ray believed that “There always another way to do something if you look for it.” Since Ray was blind it was not safe for him from taking parts in Marches instead Ray contributed to the civil rights movement finically. Ray also refused to at any venues that were segregated. In 1979, Ray was welcomed back to his home state of Georgia by the governor and received a formal apology from the governor for the segregation laws.


The book “Ray Charles, Find Another Way” is a easy read with awesome picture that guide the reader through Ray’s life while he dealt with issue of racism. This book shows us that we should not let our disabilities limit us from living our life to the fullest. I am amazed that Ray Charles who was blind could see that segregation was wrong and should be addressed. Ray Charles experienced inequality and decided to take action by boycotting and venues that promoted social injustice. This books could serve as a inspiration to common people, disabled people, poor people and anyone that is crippled by anything, that they too can stand up for their rights and fight for equality


After Reading Ray Charles “Find Another Way”, I would have student research other people with disabilities that are famous. Once the students are done pick a person, I would have them do a short biography of the person and present it to the class.” Also the book has a glossary students could define key terms in the book and use them in sentences.
Posted by Leon No comments:

Summary:
“Native American Doctor: The Story of Susan LaFlesche Picotte” is a biography of a young Omaha Indian woman, Susan LaFlesche Picotte, who became the first Native American woman to graduate from medical school. Her life was complicated by the conflicts of her upbringing in a Native American family, and the need to be a part of the society that provided her education and training. Fortunately, she was born into a supportive family with her father being the Chief of Omahas and her mother being The One Woman of Omahas. Although, her father did not want any of his children to be marked in a white world he also believed the Omahas would have to learn ‘white ways’ if they were going to live in the new white world. Picotte became the first Native American female doctor and missionary. Susan’s overall goal was to open her medical practice to all, Indian and non-Indian alike, and treated their ailments for a generation. The overall message expressed is based on advocacy for unity and the suppression of inequities among the rights of woman and the biases held about the conflict between Native Americans and Anglo Americans.

Element 4- Social Movements and Social Change:
This book is a great representation of Element 4 because it introduces children to teaching others about, Susan LaFlesche Picotte, person of a the Native American minority population who made a difference and promoted social change and progress not only for Native American but women as whole. Picotte promoted the opportunity of health for all members of her community during at time where Native Americans were migrating and in conflict with Americans. She not only surpassed the expected role of women and became a doctor but she used her knowledge to help all and promote unity.