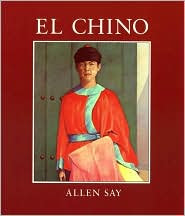 Summary: This is a true story of an Arizona-born Billy Wong who was the first-ever Chinese bullfighter. As Billy grows up, his father tells him, over and over again, "In America you can be anything you want to be.'' Billy retains his fathers advice as he visits Spain and faces one seemingly insurmountable obstacle after another on his triumphant way to the bull fighting ring. While striving to become a bull fighter he is held back by his appearance when he is often informed that "Only the Spaniards can become true matadors." So he stayed in Spain and went to bullfighting school, but after two years passed without fighting a single cow, Billy realized that a Chinese matador might stand out in the crowd of aspiring bullfighters--as indeed he did. After his first success as El Chino --The Chinese--in his native costume, Billy received an offer to become a real matador. Say's text renders Billy's complex story with simplicity and grace, and provides inspiration in presenting Billy as an endearing, determined hero.

Reflections: This story was great because it gave perspective into the life experiences of a first generation Chinese immigrant. The idea taught to Billy by his father of having the ability to be anything you want to be in America, is a similar idea that immigrants from many diverse share. The main character, Billy, was at first held back from his goal of becoming a matador because the Spaniards doubted his abilities based upon his appearance. However, this book teaches the reader that by persevering and embracing your true heritage will help you in accomplishing what you want to be.

How this book can be used: The author Allen Say has written several books that all revolve around the same theme of Asian immigration to America. His various books provide multiple perspectives on the process and experience of immigrants. Since there is a similar theme throughout his stories, this book would be good for an author study. This story can also benefit a unit on immigration because it depicts the effects of immigration on people throughout their lives and into adulthood. I would also use this book to focus on the lesson of the story which is to strive for anything you want while still embracing your cultural backgrounds. The main character was only acknowledged after he showed his true identity which made him stand out among the rest of the people. This book can encourage students to take pride and share the traditions of their culture because it is that part of their identity that makes them a unique individual.

Domains of Social Justice: 1) First generation Chinese immigrants may relate to similar struggles that faced the main character. Chinese students may learn about traditional clothing of the Chinese culture. 2) Students learn about one immigrants experience and can relate that to their own immigration experiences or those of their relatives. Students might relate to similar harships that they or their family have experiences when immigrating. 3) Students explore issues of streotyping and prejudices and how these issues held back the main character from achieving his goal. 4) Students learn from the obstacles and struggles this main character faced. Students discover ways to change negative perceptions other people make by maintaining determination and embracing ones own cultural heritage.
Posted by Rachel Mogavero