Ellington Was Not a Street 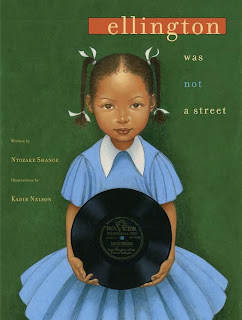 Ellinfton Was Not a Street

Summary:
Ellington Was Not a Street is a book written by Ntozake Shange in the form of a poem. In this poem, the author recalls many childhood memories of growing up in the company of "men who changed the world." She describes the open doors of her childhood home welcoming such historical and influential figures as Duke Ellington, W. E. B. DuBois, Paul Robeson, Ray Barretto, and many more. She remembers listening to these innovators as they gathered in her home to discuss politics. The poem paints a picture of the time period, capturing the mood and the warm attitudes of these important men. The last few pages of the book give a short biography of each influential figure mentioned in the poem.

Reflection:
I really enjoyed reading this book and think it would be a great resource in the classroom. The illustrations are beautiful and really draw the reader into the scene described by the little girl. The fact that the story is told from the perspective of a young girl, and told as a personal story of memories from home, makes it a great way to introduce big ideas even to young children.


How to use this book in the classroom:

This poem, which is told from the perspective of a little girl, could spark many, many history lessons. I would definitely use this book to as an introduction to a unit on the Civil Rights Movement.  It could be used to begin research projects on the influential figures who appear in the poem, or on the time period and movement in general. There are so many important people introduced, students could choose just one of the people, and research further into the role that person played in shaping history.  I think the way the poem begins and ends with "it hasn't always been this way / Ellington was not a street, " could begin a discussion on how things have changes from then to now. From this, students could also investigate street names in their neighborhood and research about other important people who have has streets named after them. Because the book is written in the form of a poem, it could also easily be used in a poetry writing or reading unit. The poem makes use of many literary elements such as repetition, simile, and imagery. Even visually and rhythmically, the line breaks and form of the poem would be interesting to focus on.

Social Justice Education:
This book relates to many of the stages of social Justice Education.
2) Respect for Others: This book could be used to introduce students to the history and culture of African Americans in this country. The poem portrays these characters in history as innovative, respectable, and intelligent people whose hearts and minds were open.
3) Exploring issues of Social Justice: Although the issues are not named in the poem, the ideas of such social justice issues are addressed in the work of the men who were fighting against racism and segregation, and towards rights and equality.
4)Social Movements and Social Change: The poem is all about the men who worked to bring social change to this country.
Posted by Rachel Mogavero