Mary Braddock
Book Group # 2
Title of the Book: Private and Confidential A Story About Braille 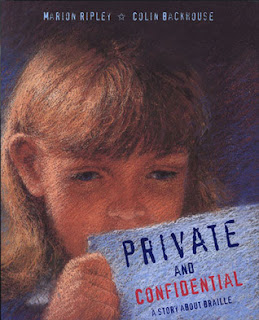 Author: Marion Ripley
Illustrator: Colin Backhouse
Summary: Private and Confidential is a story about a young girl who longs to have a pen pal. When she finally gets one she discovers that her pen pal is visually impaired and that his sister has been reading him all the letters she writes him. The young girl initially becomes very upset about this but she then decides to learn how to write and read Braille so that her and her pen pals can keep their letters private and confidential between the two of them.
Reflections: This is a very simple story, but has an extremely powerful underlying message. The simplicity of the story is engaging though for young students and it’s not just a sappy story about someone who is visually impaired. It can bring up many discussions about a number of different issues, but it especially touches on the topic of how to treat others whom have handicaps or disabilities.
How would I use the book/curriculum units: I recently used this story as a Read Aloud in my student teaching placement in a second grade general education class. I chose it as a read aloud because it was an engaging story and it is a great way to introduce children to the subject if visual impairment. My students loved it. They were extremely attentive and engaged throughout the whole story. Wow! They were also so taken back by the idea of writing and reading in Braille that they asked if I could teach them how to read/write in Braille. Granted this is something I do not know how to do but the back of the book contains some basic to learning how to read Braille so along with my students we learned how to do some reading and writing in Braille. We also then read a book on Louis Braille the inventor of Braille which then led into a geography lesson on .
After reading the story one of my students mentioned that their grandmother was visually impaired. Another one of my students mentioned that his grandmother was losing her vision and that she often read books on tape so he thought it would be a good idea if some how we could put our published pieces on tape and then send it to her nursing home. I was really impressed with the students’ initiative to think of ways to be more considerate of people having the same opportunities as them. The students discussed how they thought we should do something to ensure that all people are able to read out stories.
Domains of Social Justice: 1) Domains of self-love and acceptance: Students learn to love themselves for who they are. In this case Malcolm who is visually impaired teaches his pen pal that although he has a visually impairment he is still a kid like everyone else and believes he deserve to have the same opportunities to do things like having pen pals like every other kid. He teaches Laura about the cool things he knows like Braille.
2) Respect for Others: In the story the other character Laura learns to appreciate Malcom for Malcom as a person not just by his visual impairment. Students will understand that people are defined by who they are not their disability. Students will learn ways to more considerate of others needs in our everyday world.
3) Exploring Issues of Social Justice: Students can think about how they can make small changes in their everyday world to accommodate those with special needs or disabilities. Students can observe how places that should be public are not accommodating to all people
4) Social Movements and Social Change: Students can make changes in places that are not accommodating to all people or even make changes in their own classroom, school, or community.
Posted by Rachel Mogavero