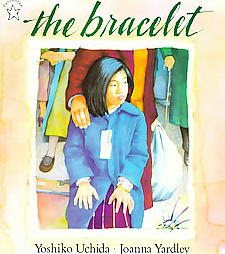 The Bracelet
Written by Yoshiko Uchida
Illustrated by Joanna Yardley

Links to where you can buy the book:http://search.barnesandnoble.com/booksearch/isbnInquiry.asp?z=y&EAN=9780698113909&itm=3
Summary: A young girl named Emi and her family are sent to an internment camp for Japanese Americans. Emi is nervous and scared about leaving home, especially because she wants to make sure that she remembers her best friend named Laurie. Laurie gives Emi a bracelet to wear and always think of her when she sees it on her wrist. Emi promises Laurie that she will never take it off. When Emi and her family arrive at the camp, they are sent to their barrack and Emi realizes she has lost her bracelet. Upset and sad, she felt it was the only way to remember Laurie. When she and her family unpack, Emi remembers the sweaters she and Laurie wore for this first day of school. Emi then realizes she doesn’t need the bracelet to remember Laurie because she will always be in her heart.
Reflection: This was a great book because it shows how an innocent family deals with the hardships of the internment camps. This book depicts the struggles a family has to go through as they try to come to terms with what is happening. This story is real in that it illustrates a dark moment in American history and has an aspect that others can relate to, such as worrying about not remembering a friend. Rich illustrations accompany the text so the reader can truly see how hard it is on a family.
How I would use the book/ curriculum units: This book would fit well in social studies, especially in a unit of study on World War II. It would work with class discussions about past experiences and how we can work together to learn from them to be able to improve the past and future. The book would also work with a unit study on character, as students could write about the way Emi deals with the hardships and see if they would react the same way. The concept of empathy could be introduced as students could try to imagine how Emi feels and complete a writer’s workshop entry.
Links to lesson ideas:
http://www.teacherlink.usu.edu/tlresources/units/byrnes-famous/YOSHIL1.html

http://teacherlink.ed.usu.edu/TLresources/units/byrnes-literature/JONES.html
Domains of Social Justice:
1.) Self-Love and Acceptance- Children learn about their own culture. Emi continues to learn about her culture and that everyone is not as accepting as he or she should be.
2.) Respect for Others- Strengthens intercultural competence.Emi learns that she and her family were not respected as they should have been, since they were sent away and she tries to come to terms with this information.
3.) Exploring Issues of Social Justice- Racism, Classism, Sexism, homophobia and other forms of oppression are confronted. Emi’s family is oppressed because they “look- like” the enemy and are forced to leave their home and are faced with both emotional and physical struggling.
4.) Social Movements and Social Change- Students learn how people have struggled for social change. Emi realizes that she and her family are not being treated well and that they must learn to make the best of their situation and work together. This will allow people to learn from the past so the same events do not happen again.
5.) Taking Social Action- Students explore their own context and develop tools to work for change. Emi learns that although she and her family were sent away, she will always remember her friends in her heart and will use her situation to learn about herself and others as they work together to deal with the hardships they face.
Posted by Rachel Mogavero