My Name is Bilal


My Name is Bilal 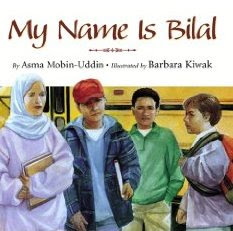 
Summary: Bilal is a Muslim who moves to a new town with her sister. On the first day of the school, they encounter racism. One day, Bilal sees her sister getting mocked by wearing the headscarf. As she gets mocked by these white kids, Bilal feels that the school is a cold place to be in. Because of this fear, he changes his name to Bill so that people won’t look at him as a foreigner. Then, his teacher who is also a Muslim, gives him the book called, Bilal Ibn Rabah, Friend and Helper of the Prophet. By reading the book, he becomes aware of his identity and eventually accepts his Muslim name. The next day, when students mock at his sister, he defends her by saying proudly that they are Muslim.

Domains of Social Justice:
1.) Self-Love and Acceptance: Like the main character in the story, students will learn to accept and appreciate who they are and find importance in their own identity.
2.) Respect for Others: This book is a great example for teaching respect for others. As Bilal accepts his identity and nationality, he shares his cultural background to other students. Therefore, his friends eventually realize and accept him as a friend.
3.) Exploring Issues of Social Injustice: This book shows how racism and cultural difference could hurt and influence Bilal and his sister.
4.) Social Movements and Social Change: When Bilal accepts himself, his friends also become open-minded about his identity. Later, his friends change their perspectives on racism and they become great friends.
Posted by Rachel Mogavero