All for the Better


All for the Better: A Story of El Barrio

All for the Better: A Story of El Barrio 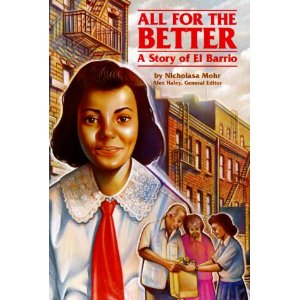 This book tells the story of a little girl named Evelina, who is born in Puerto Rico during the Great Depression. Her mother sends her by herself to the US, where she goes to live with her aunt and uncle in El Barrio in Manhattan. It takes a little while, but she soon learns English and fits in at school, making a close friend named Sarah. A few black girls at school bully and tease her, but Evelina learns not to use violence and is able to stand up to them, and the girls soon become friends. Because of the depression, many of the families in El Barrio are on welfare and are entitled to collect food, but many are too embarrassed to go get it. Evelina arranges a way to get the food herself and deliver it to the needy families. She begins to encourage them to start going themselves, pointing out it is ok to accept help. Evelina has saved up many she has made translating for people in the neighborhood who speak only Spanish, and soon her mother and sisters are able to come live in New York too. As an adult, Evelina continues her activism and becomes involved in improving the education system.
The book can be used during a unit on immigration. Students will have the chance to discuss Evelina's journey and what feelings she had before, during, and after the trip to America. Students can write their own story about coming to America (either real or fictional) and document what it would be like for someone their age to come to the U.S. alone. Students can role play different parts of Evelina's experience and discuss them afterward. This book can also be used when discussing the Great Depression and the hardships people faced at the time. It introduces a culture's experience that is rarely portrayed in books. The book also includes multiple Spanish phrases and words which gives the reader a glimpse into Evelina's home culture and having to deal with making sense out of a new life. This could be something relatable for some students. The book also opens the door to talk about the hardships faced within families and familial relationships. At the beginning of the 1st cha pter it says the mother had to make the hard decision to send Evelina and then she had to deal with leaving her family and missing her siblings grow up. Students can discuss"What's the definition of 'home'?" and  "What does that look/feel like to different people?"
Social Justice Education
1.     Self-Love and Acceptance: The main character, Evelina, is faced with racism and prejudice from a bully and the bully’s friend but she is able to stand up against it eventually. She does this because she recognizes the importance in speaking up and being proud of your heritage.
2.     Respect for Others: Evelina makes a best friend in Sarah and they work together to learn each other’s cultures—Sarah is particularly good about this because she helps Evelina learn English. Evelina’s aunt also explains to Evelina that there is a connection between the other people in her community even if it feels like they are very different. Evelina eventually even became friends with the bully and the bully’s friend.
3.     Exploring Issues of Social Justice: Racism is faced, particularly in the scene with the bully. In this scene the bully picks on Evelina and calls her a “spick girl,” therefore making use of derogatory language. Classism is also certainly addressed rather evidently. Evelina begins to help her neighbors who are poor and unwilling to claim their government-sponsored food. It is indirectly stated that low socioeconomic status means people cannot care for themselves and do not have food to put on their tables.
4.     Social Movements and Social Change: The poor people in the community did not want to be perceived as beggars so they have a hard time breaking through the barrier towards social change. Evelina wants to help them change and get food for the poor but it takes some convincing on her part in order to get them to agree.
5.     Taking Social Action: Evelina went to her neighbors’ doors and had them fill out the paperwork to receive their food and then she offered to go uptown to pick it all up that day. She recruited people to help her and was eventually able to motivate her neighbors to take care of themselves and gave them the skills they need to be self-sufficient. Evelina also worked to save money for her aunt and uncle who were having a difficult time making ends meet during the Depression.
Posted by Rachel Mogavero