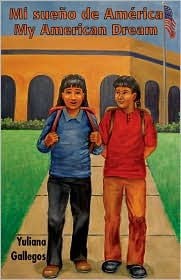 Summary: This story is really special because it is autobiographical. It was written by a twelve-year-old girl who moved from Monterrey, Mexico to Houston, Texas. What is even more wonderful is that the book is in both English and Spanish. Yuli, a fourth grader new to the United States is struck with culture shock when she enters her new Houston school. She quickly realizes that her English is not as good as she had thought. She cannot understand the teacher, and no one seems to want to help her. In fact, none of the students seem interested in her at all. With the help of a devoted family, she improves her English and works her way to the top of her class. Others seem to like her now. However, when she isn't invited to a "friend's" birthday party, she quickly realizes who her true friends are.

How I would use this in a classroom: This book is a wonderful way to encourage students in their writing. Yuli wrote this story as a twelve-year-old. It is a wonderful example of personal narrative writing. However, I think the most important part of this book is the story itself. Yuli was able to capture the emotional journey one takes when encountering a new culture as a child. Her thoughts were honest and sincere. In the end, she is able to find herself with another girl from Japan. I would also use this book for the Spanish. For students who come from Spanish speaking homes, reading a book that has Spanish in it will emphasize the importance of both languages in their lives.


Domains of Social Justice:
1.) Self-Love and Acceptance: Children learn about their own culture. Yuliana's culture is emphasized by her experiences in a new country. Not only does Yuliana learn to find her place in her new community by being herself, but she makes friends with a girl from Japan. Despite their different cultures, they find friendship in each other's similar experiences in a foreign country. In addition, the Spanish in the book makes Spanish just as important as English.
2.) Respect for Others: Strengthens intercultural competence. Yuliana is not judgmental of her seemingly unfriendly peers. Her mother always reminds her that it is hard for everyone to be around new people at first. Eventually, Yuli becomes friends with a girl from Japan.
3.) Exploring Issues of Social Justice- Racism, Classism, Sexism, homophobia and other forms of oppression are confronted. Yuli seems to think that many of the students do not talk to her because they do not like people from Mexico. She notices that they help Shoko, her friend from Japan, just not her. It is not until she learns English fluently that they even say "Hello" to her.
Posted by Rachel Mogavero