The Composition by Antonio Skarmeta 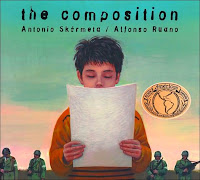 Summary:
Antonio Skarmeta wrote this children’s book about a boy named Pedro who lives with his mother and father in an unnamed country under a dictatorship. This book is about freedom, making choices and personal responsibility from a child’s point of view. Every day after work Pedro’s parents and neighbors sit around the radio in his home listening to broadcasts from a “long way away.” Pedro does not understand why the adults are so interested in listening to the radio, and goes on with his daily life, going to school and playing soccer with his friends. While he is playing soccer one day, Pedro witnesses his friend Daniel’s father, the owner of the local grocery store, being taken away by soldiers. When he asks his parents about what happened, he learns that Daniel’s father, as well as his own parents, are against the government dictatorship. The next day, a man in uniform named Captain Romo enters Pedro’s classroom, asking all the children to write a composition as part of a contest called “What my Family Does at Night.” At the end, Pedro’s composition is revealed through his parents reading it. He describes a very boring, and blatantly false story of what his family does at night, “I go out and play soccer…we sit at the table and I eat…after supper my father and mother sit on the sofa and play chess and I do my homework.” His parents smile after reading this, and his father says, “Well, we’d better buy a chess set.”

Reflection:
I thought this book gave a strong, but subtle account of how children can take action against something with which they disagree. There is no specified culture or country, giving the message a more universal meaning. In this book, Skarmeta seeks to show how children come to conclusions about and act on the world around them, even if they seem like they are not aware of what exactly is going on. Many adults may think that children should not be exposed to the real issues and are innocent to injustice in the world, as reflected in Pedro’s mother’s words when Pedro asks if he is against the dictatorship, confused about his role in the matter. His mother replies, “Children aren’t against anything, Children are just children.”
The children’s’ awareness of the situation becomes clear when they are asked to write a composition for the General about what their families do at night. Pedro discusses the paper with his classmate Juan, asking him if he is against the dictatorship. Juan replies with “Of course I am…they took my father away up north.”
Pedro’s composition shows that he knew exactly what the soldier was looking for, and it was not just a school composition contest, but a way to find out more information about who is against the dictatorship. Pedro’s fabricated story about his parents playing chess every night was an action against the government, protecting his family and displaying his awareness of the government situation and the importance of freedom and personal choice.

Domains of Social Justice:
1. Self-love and acceptance: Pedro is a normal boy, living in a small community, and he learns more about his role in his family and community, and realizes the importance of his own actions. Students will learn more about their roles and how they are an important part of their own communities.

3. Exploring Issues of Social Justice: Pedro’s community experiences government oppression. His friends and neighbors are being taken away by soldiers, and the government even invades his classroom to get more information about their families.
Students will learn of the injustice of a dictatorship and why Pedro’s community is living in fear.

5. Taking Social Action: Pedro chooses to fabricate a story about his family because he knows that the government may not like that they listen to the radio every night and are against the dictatorship. Students will see how Pedro took action, and although it was a seemingly small action, it was important to protect his family. More importantly, his awareness of the situation shows that children can take a stand and choose to go against something that is unjust. Students can think about their own personal choices and how tey have effected their lives and the lives of others around them. They can brainstorm more ways they could take an active role in their own communities, as well as ways they coud help others that are facing injustices. The children can chose one small thing to do indivudally and one larger action to take as a class against an issue with the government or community.

Other resources:
Website of lesson ideas for this book:
http://www.lindakreft.com/Americas/composition.html
Dictator For a Day:
http://school.discovery.com/lessonplans/programs/tlc-ancientrome/#que