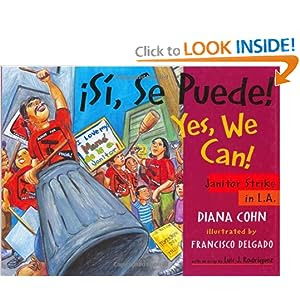 Summary: This book is about a boy named Carlos and his mother. Carlos is the narrator and tells the story of how his mother's struggle to provide for her family after she moves to the United States from Mexico. Mama, Carlos' mother, is a janitor in Los Angeles, CA and decides to fight for her rights by holding a strike with her fellow union workers. With the help of the other union workers from around the state and country and other various people, Mama and Carlos are able to stand for what they believe in and accomplish a common goal of getting higher pay and respect for the union workers. The illustrations are vivid and capture exactly what the author is saying in the story. This book is a wonderful depiction of how organization and social movements can create social change when people work together and believe that yes, they can!

Element 4 (Social movement and Social Change): This book really represents element four because it shows children that no matter what age you are, you do matter and you can make a difference. Carlos' mother needed his help by understanding that she would be out of work and doing something for the community by participating in the strike and needed his understanding which he gave her. Carlos represents all children that would like to help out and create change as well. He started a movement in his classroom to help out their parents in the strike, and decided to help her again stand for other people that needed their help at the end of the story. His show of courage would inspire any child that reads this book because no matter the age, all you need is the desire and you can create social change.

Activity: This book can be read with any class as young as kindergarten but the grade level in which I found a really good activity would be 3-5. One of the resources above is for grades 6-8 but I believe we can make it appropriate for fourth or fifth graders by having them read the book and then create questions that they would ask janitors or people in service about their daily work lives. We could then make home connections by asking if anyone has any relatives that are in the service industry that would be willing to come to class and meet with the students to answer their questions. The teacher could also go about bringing in a janitor from the school if the school would permit it which could be a bit easier than having the students go off and find janitors in the school themselves as the activity above suggests. We could then see how they feel about what they have learned and if there was something they would like to change about it, they would be able to write letters to the appropriate offices to try and create change for that specific group of workers.
Posted by Ashley Padron No comments:

One MIllion Men And Me Summary:
One Million Men and Me is a picture book that vividly recounts the historic Million Man March.  The movement took place at the Lincoln Memorial in Washington, D.C. on October 16, 1995. The author retells the events of this day from the perspective of a young girl who accompanies her father.  The epic story, that the young girl shares, is filled with heroic and inspiring black men.  The book portrays colorful and lifelike illustrations of black men from all walks of life (different ages, religious beliefs, cultural and economic backgrounds) who marched, stood shoulder to shoulder, and joined hands for peace and unity.  The author’s purpose is twofold.  First, the book celebrates the special relationship between an African American father and his daughter. Secondly, book commemorates an important and historic day for Black America.


Element 4: Social Movements and Social Change
One Million Men and Me, as well as this element, teaches students about a movement of iconic and everyday people who unite to address issues of social injustice.  The Million Man March brought together Black men who were committed to empower themselves and each other to make positive and lasting changes within their families and communities.  The activists were inspired by speakers such as Min. Louis Farrakhan, Rev. Jesse Jackson, Mrs. Rosa Parks, and Dr. Maya Angelou who gave powerful voices to this movement.  People around the nation and world supported this widely televised movement.  According to Lyons, after the movement, black men registered to vote in record numbers, there was a spike in applications to adopt black children, some men started new businesses and organizations, and others volunteered.  The black men worked to make their communities safer and economically sound, to be better fathers, husbands, role models, community leaders, and activists.


Other Resources:
Women in Support of the Million Man March