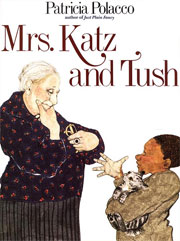 Mrs. Katz is Larnel’s neighbor whom he doesn’t know very well, but is very good friends with his mother. All that changes however when Larnel learns Mrs. Katz’s husband passed away recently. He decides to go over by himself one day, and asks Mrs. Katz to adopt an abandoned kitten. Mrs. Katz agrees under one condition: Larnel must help her take care of the kitten. Larnel agrees and as he begins to spend more time with Mrs. Katz and the kitten whom she names Tush, Larnel learns a lot from Mrs. Katz. Mrs. Katz tells him stories about all the good times she spent with her husband and about coming to America from Poland. As Larnel grows to love Mrs. Katz, he also learns about the difficulties of Mrs. Katz past, and begins to understand the troubles and triumph black history shares with the Jewish heritage.

I thought this book was wonderfully written, and exposed the reader to a variety of important concepts that were weaved into the story beautifully. Mrs. Katz and Tush touches upon the relationships that are established between generations, and the importance of learning from one another and building on that. Mrs. Katz is significantly older than Larnel, and throughout the book as she shares the different types of traditions with Larnel, Larnel makes it a point to not just understand but to become a part of those traditions. Not only does this exhibit acceptance of different cultures, but it displays the respect the two have for each other. Just because Mrs. Katz was older, Larnel did not judge her or make assumptions off of that. He was open-minded and displayed a willingness to learn. The importance of tradition was also exposed throughout the book. Mrs. Katz and Larnel together go to the cemetery to place small rocks on the top of Mr. Katz’s headstone, and Larnel asks if he could spend Passover with Mrs. Katz. I believe these parts, along with other sections of the book relay that importance of carrying on traditions that are passed down from generation to generation, whether it be religious, cultural, etc. On a much larger picture, this book also touches upon difficulties two different cultures experienced in history. The point I believe that was trying to get across was, even though Mrs. Katz and Larnel came from two different backgrounds, the suffering and challenges that their people faced were similar. In addition to understanding that both cultures were faced with similar and different situations, that were harsh and unfair, the one important commonality between both groups was the feeling of pain and unfair treatment.

I also felt the pictures in Mrs. Katz and Tush expressed a lot of emotion to the reader. Each page represented emotions so powerfully, that when reading the text and looking at the pictures on the same page, I began to sympathize with the characters.

How would I use the book towards curricular units:

A whole unit can be done on hardships different cultures have faced, and students can identify that people of different cultures have been treated poorly and put in unfair situations but they’ve all experienced the same feeling of pain and suffering.
Students can learn about the importance of their traditions and values, along with the respect and acceptance of other traditions.

1) Domains of self-love and acceptance: Students identify their own traditions and learn to appreciate and accept the values and traditions exhibited in their families, culture, etc.

2) Respect for others: Students learn to appreciate the traditions and cultures of others.

3) Exploring issues of social justice: Students research and learn about different time periods where cultures were faced with oppression. More importantly, students explore and understand that suffering still occurs today, throughout the world.

4) Social movements and social change: Change the rules around in the classroom and ask students if they wanted the rules to go back to the original way, what actions could they take. Identify how different groups in the past responded to injustice.

5) Taking Social Action: Students explore an issue of injustice- look up an organization that speaks out for social change and identify ways they can become a part of it.
Posted by Rachel Mogavero