What Zeesie Saw on Delancey Street


What Zeesie Saw on Delancey Street 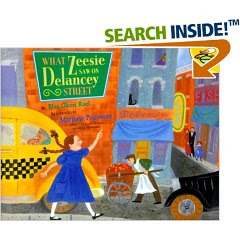 This beautiful book is a story about a 7-year-old girl named Zeesie who is allowed to accompany her parents to a 'package party' in the early 1900s. Taking place on the famed Lower East Side of New York City, we are able to gather information about certain aspects of life some Jewish immigrants faced as they began their lives as citizens in this country.

This book has a unique approach to showing life as an immigrant in that it does not expressly call them immigrants, nor does it make obvious the point that the people in this story are struggling or poor. In fact, the setting is a party and for everyone else attending, it is just that.

The book leaves behind the simple 'Jewish people surviving' facade and takes on a more universal appeal when Zeesie sneaks into a room that only the men are allowed to go into. The Money Room is so named because all of the men go into it one at a time, and either leave spare money they have, or take any they need to help feed their families. The book does a beautiful job showing how this community, and others like it, come together to support one another and ensure success. It is an example of human beings reaching out to others in need, something all communities do, immigrant or not. When Zeesie realizes the power of the room, she leaves the dollar she has saved up, knowing that she is helping another person, even though they will not know she directly helped, and that she can no longer afford to go to the movie theater as she planned. She knows the dollar is better spent in that room.

This book would be great for units on immigration, because it tells a different side of immigrant life we don't often hear about. It could also help with a unit about New York's olden days, and also for a unit on friendship and/or tolerance.

As far as social justice education, this book achieves levels 2, 3, and 5. They can use Zeesie's selfless act to begin figuring out ways they too can better their own communities and the community at large. They can do this in many ways besides monetarily, striving to really fix the problems they see rather than just slapping a band-aid over.