Muhammad Ali Champion of the World


Muhammad Ali Champion of the World 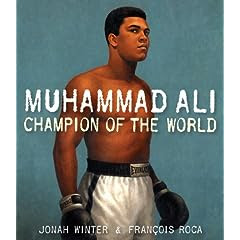 Summary:Muhammad Ali Champion of the World is a picture book about Ali’s professional boxing career. It is written with a poetic feel, possibly alluding to Ali’s style of speech. It quotes some of Ali’s famous sayings, and uses a unique font to convey a strong message about determination and believing in yourself. The book highlights moments of Muhammad Ali’s professional career, from when he changes his name to when he refuses to fight in the Vietnam War. The book ends with the infamous “Rumble in the Jungle” where Ali defeats George Foreman in Africa.

Reflections:
I chose this book because I wanted to expose my students to a famous African-American who is overlooked in the social studies curriculum. I thought that my students would be interested in hearing Ali’s story because he is a famous person who is not discussed in schools; he is an icon of determination and strength, and some of my students were familiar with his name.

When reading this book to my students, they were extremely sensitive to the racism that was apparent during Ali’s time. Students exclaimed, “That’s racist!” and it evoked some powerful emotions.

How I used the book / Curriculum Units:I used this book initially as a read aloud to introduce some new vocabulary words to the students. However, since the book conveys such a powerful message, I also used it for accountable talk asking students to critically discuss the major issues in the book. Students were prompted with different note cards that said things like “Muhammad Ali is (or is not) a leader because…” and “Cassius Clay changed his name to Muhammad Ali because ______________. I think that…”

This book can be used to introduce a unit on positive role models and what it means to be a role model in a community. In addition, this book may follow a slavery unit where it can be used to talk about the impact of slavery on future generations of the African-American community. Slavery affected Muhammad Ali, and students can refer to his experience to explore how slavery in this country’s past affects us today.

Portions of this text can be used in a poetry unit, especially because Muhammad Ali was famous for quoting poems to predict the outcome of his fights. He coined some famous quotes that are still used to today, such as “float like a butterfly, sting like a bee”.

Domains of Social Justice:
1. Self Love and Acceptance – Students will learn that strong faith in themselves will help them accomplish great things. Muhammad Ali continuously believed in himself through the hardest times and was able to become the champion of the world. Students may discuss what a role model is and what it means to be a role model in today’s society.
Students may also engage in a study of Africa, exploring Ali’s strong sense of African pride and connecting that to a study of students’ ancestors.

3. Exploring Issues of Social Justice – Students will discuss aspects of racism Ali faced during his professional career. It will help put into perspective the effects of slavery on people of more recent generations.

4. Social Movements and Social Change - Students will explore Muhammad Ali not only as a boxer but an international humanitarian. He has been an advocate for the world’s hungry, and helped those in need in his home country as well. Students will continue to explore what it means to be a role model, and how they can be an advocate for change as well.

5. Taking Social Action – Continuing in Ali’s footsteps, students will choose a cause that they strongly believe in, or contribute to an organization that Ali is an advocate for. They can do something simple such as volunteering in a soup-kitchen, or contributing to the Muhammad Ali Parkinson Research Center or the Muhammad Ali Boxing Reform Act.
Posted by Rachel Mogavero