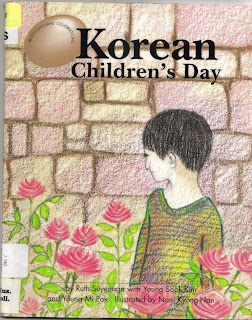 Summary: Korean Children's Day is a story about how Mrs. Carnie's 4th-grade class became the Tae Kwon Do champions of Raymond Elementary School. Young Soo Newton, is an adopted boy from Korea who lives in America with his family. He takes Saturday classes at the Korean Institute because his adopted parents want to make sure he never forgets about Korea and his Korean heritage/traditions. He decides to bring his friend Jeremy along one Saturday, because they are celebrating Korean Children's Day. Jeremy, as well as the reader, learn about Korean Children's Day and Korean culture/traditions. In the end, Jeremy is so takenaway with Tae Kwon Do that he suggests to Young Soo Newton that their whole class at school should partake in this tradition. In the end, Mrs. Carnie's class becomes Tae Kwon Do champions of Raymond Elementary School.

Reflections: This was a great book because it shows how people can appreciate, learn, and participate in the traditions of another culture. It shows cultural appreciation not only on the intercultural level, but also on the level of adoption and identity. The fact that Young Soo was an adopted child from Korea makes the story more real. His parents make an effort and show appreciation to their child's country of origin. Often when children are adopted they are forced to assimilate with the culture of their adopted parents and forget where they came from. The illustrations are done in what appears to be colored pencil, which is interesting and different.

Domains of Social Justice: 1) Domains of self-love and acceptance: Students learn to love themeselves for who they are. In this case, Young Soo appreciates his Korean heritage and continues to practice and learn about his country of origin. 2) Respect for Others: Students learn to appreciate and learn about the cultures and traditions of others. 4) Social Movements and Social Change:Students learn that they can take a proactive approach to learning about other people's cultures and appreciating those cultures. Taking Social Action: Students learn how they can encourage other people (ex. Mrs. Carnie's 4th-grade class) to appreciate and participate in learning about the cultures of others.
Posted by Rachel Mogavero

Email ThisBlogThis!Share to TwitterShare to FacebookShare to Pinterest
Labels: Element 1: Self-love and Knowledge, Element 2: Respect for Others, Element 4: Social Movements and Social Change