The Great Kapok Tree
A Tale of the Amazon Rain Forest

Written and Illustrated by Lynne Cherry

Summary: One day a young man goes into the Amazon Rain Forest and begins to chop down a Kapok tree. After working for a while he rests and soon falls asleep. While he is sleeping the animals of the forest come up to him and ask him him to stop chopping down the tree. The animals, including a boa constrictor, monkeys, many bugs, birds, a jaguar, and even a young boy of the Yanomaono tribe, all have their reasons to ask the sleeping man to stop chopping down the tree. The man wakes suddenly to find himself surrounded by all the creatures who had spoken to him. He notices their beauty and the beauty and wonderment of the forest around him. As he gets up to begin working he looks around again, dropping the axe he leaves the forest.
Element 5: This book demonstrates raising awareness through the actions of the animals. All the animals love and care about the tree and do not want the man to cut it down. Every animals gets their chance to tell the man why the tree should stay. The whole point of raising awareness is to spread the word about issues. When the man came into the forest and began to cut down the tree this presented a troubling issue for the animals who live in and depend on the tree. To raise awareness is to ask others to "look upon us all with new eyes," like the little boy asks of the man. It also shows that if you present your issue something might get done about it.

Activity: After introducing students to the idea of deforestation I would use this book to introduce the students to a way they can help save the rain forest. I would have the students explore the websites of prominent organizations that help save rain forests. such as AIRR or STARO. The students could then come up with a fundraiser to be able to make a donation or to adopt an animal who is endangered because of deforestation. ( WWF )
Posted by Megan M No comments: 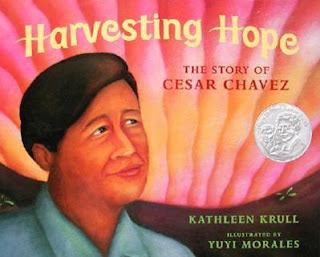 Written by: Kathleen Krull
Illustrated by: Yuyi Morales
Buy it here!
Additional Resources
Grades: 3-4
Summary: Harvesting Hope tells the story Cesar Chavez and how he decided to speak up and raise awareness.  He lived with his family on a ranch in Arizona and had a great childhood. When a drought hit Arizona, he and his family were forced to move and find work elsewhere.  They ended up becoming migrant farm workers and moved many times throughout California.  He saw how cruelly the landowners treated their workers.  He and his family were paid very little and were often abused or beaten.  He dropped out of school after 8th grade and continued to work full time to help his family.  During his twenties, he decided to dedicate his life to fixing this issue.  He inspired other workers to join him and told them that the truth was a much better weapon than violence, just like his mother had always taught him.  Using this philosophy, he organized a march which went on for over three hundred miles. Cesar’s perseverance and determination paid off because while on the march, he was asked to sign the first contract for farm workers in history.  He raised awareness about the negative treatment of farm workers in America and it resulted in a positive outcome.

Representation of Element 5:
The story shows many examples of raising awareness. Cesar felt very passionately about the negative treatment of farmers and went to others to share his feelings. People were hesitant to join him and didn't take him seriously at first, but because he felt so strongly about this, he was able to convey the importance of the issue and get others to join him, therefore raising awareness about it. As an individual, he dedicated his life to this cause and he was very calm and levelheaded, but stubborn when it was necessary.  He reached out to people one by one. These qualities allowed him to get through to people, and he put so much effort into informing others about the issue at hand by talking to them individually.  He would tell other farm workers and "outsiders" what really went on behind closed doors and expressed the importance of it being stopped. He organized meetings, encouraged nonviolent action, and put together the march. Also, the fact that he encouraged truth and nonviolent action, even though some who were on his side were using physical action to solve the problem, definitely worked in his favor.   The way Cesar carried himself and treated the situation impacted his ability to raise awareness, and he most definitely succeeded.
Use in class: I think this book it a great representation of Element 5.  As an activity, I would have the students research other historical figures that raised awareness nonviolently, like Martin Luther King, Jr. for example. The class would research a person that appealed to them the most and would write a short report about their findings, but also create a corresponding presentation. This presentation would be delivered through the character’s point of view and the students can even dress up as the person they picked. While one person is presenting, I will have the rest of the class take notes on the presentation so everyone walks away from this lesson learning something new about historical figures.
Posted by Alexa F. No comments: 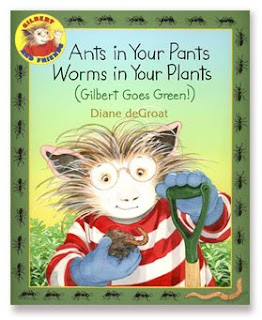 Summary: Gilbert’s class is working on poems about spring time. This inspired their teacher to take the class on a picnic. When they got to the picnic area they saw trees have been cut down and there was garbage everywhere. The class decided to clean up the area and continue with their picnic. Their teacher explained how great it was to clean up the area and asks the children to start projects that would help the environment for Earth Day. Gilbert was having trouble thinking of an idea until he sat under his favorite tree and a great idea came to him. He decided to plant a tree at their picnic area to replace the one that had been chopped down, he also explained the benefits trees provide for the environment.

Element 5: This book pertains to element 5 because it raises awareness about pollution and will teach children ways to take care of the environment. They will be more aware of why littering is bad for the environment and notice how it can ruin outdoor activities such as picnics. This could inspire students to clean up around their school and community. Not only would they become more aware about the issue of pollution but they would make their families and community members aware as well.

Activity: I would read this book to my students in the beginning of the school year. The first part of the activity would be to discuss ideas to help the environment. Then each student would make their own list of ways to help the environment and we can implement these ideas into our classroom as well as sharing them with student’s families and communities. The second part of the activity would be to plant our own class tree. By conducting this activity at the beginning of the school year the children will be able to watch their tree grow as the year continues. There can also be a new student monitor every month to measure the tree and record how much it has grown.

Posted by Andrea G No comments: