Fire at the Triangle Factory


Fire at the Triangle Factory by Holly Littlefield 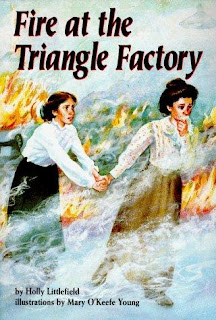 Fire at the Triangle Factory by Holly Littlefield

Available for Purchase at: Amazon

Summary: This book is about two 14-year-old girls, Minnie a Jewish girl and Tessa an Italian Catholic girl, seamstress coworkers in a crowded work factory on the upper floors of a building in Greenwich Village (Now the Silver building on NYU’s campus) in 1911. One day a fire breaks out in the factory, resulting in the deaths of 146 workers. The book tells the story of the two girls struggle for survival. This historic event in history changed the labor laws and safety codes for the future generations.

My Opinion: I love this story because it tells a story of child labor, religious differences, and overlooked labor laws. It is a story of tragedy that results in social change. It also is very relevant for children in New York City because it tells of specific landmarks and communities that the children live in today.

Possible Topics: You could use this book for numerous lessons and unit studies! It covers topics of labor laws and how they were neglected and obscure before the fires. It covers child labor. It discusses the importance of safety and evacuation plans. It discusses the life of immigration work and New York City. It also talks about the religious differences and family opposition among the Catholics and Jewish communities of the early 20th century.