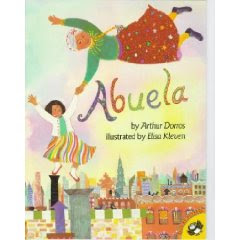 Summary: This story is narrated by a young Hispanic girl Rosalba, who lives in New York City. She spends a day with her Grandmother, Abuela who speaks only Spanish. They begin their adventure when Rosalba ponders about how it would be like to fly with Abuela. They fly across New York City and end up in the land where Abuela grew up. They return to New York City and pass by the Statue of Liberty before they arrive in Rosalba’s Aunt and Uncle’s store. They spend quality time together interchanging Spanish and English words as they explore the environment around them.

How would I use this in a classroom: This book is a great way to introduce the conglomerate nature of America, much less New York City. The illustrations can be used with younger grades for recognition of the type of society they reside in. The idea that Rosalba is from a bilingual household who is growing up in America but holding onto her roots through her Grandmother can be used relate to many different types of students. The story shows how Rosalba’s Aunt and Uncle adapted to living in America while holding onto to their roots. Also, the book incorporates Spanish words making it appealing for Spanish speaking students who are learning English. It emphasizes the importance of embracing new cultures as well as maintaining one’s own.

Domains of Social Justice:
1) Self Love and Acceptance: Children learn about their own culture. Rosalba learns more and more about the traditions and ideas of her culture through her Grandmother. They explore foods and her Grandmother’s experience coming to America.

2) Respect for Others: Strengthens cultural competence. The illustrations in this book strongly emphasize unity and a cooperative society amongst a diverse population of people. The pictures depict individuals of all races, abilities and age as well as interracial relationships.
Posted by Rachel Mogavero