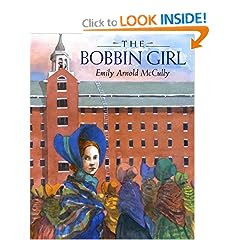 Summary: This book is based on a true story of the female factory workers in Lowell, Massachusetts during the early 19th century. They were overworked in dangerous conditions, and when approached with a pay cut, the women walked out. Unfortunately, some women went back to work because they needed the money, others moved to get new jobs to support themselves, and the owners eventually imported girls from New Hampshire to take the jobs. However, the women set a precedent that workers have the right to walk out if they feel they are treated unfairly, which has inspired thousands of protests and workers' rights movements in the past 170 years.

How to use this book: This book can be used to discuss the historical time period (1830s), historical fiction, women in the work force, workers' rights, labor movements, industrialization and factories, democracy, fairness, compromise, negotiation, equal pay/minimum wage, the 10-hour workday, current immigration/labor issues, among others. It can be used with any grade, given the wide range of topics it addresses.

Social Justice Education Domains:
Self-love & Acceptance- Students can do a writing/thinking activity to consider their role in the democratic classroom, their value as a student, and the power they have to compromise/negotiate their school conditions.

Respect for Others- Students can learn about labor conditions in various parts of the United States and other countries that impact cultures. An appreciation for those who work in various types of jobs for various wages can be established.

Exploring issues of social justice- Students can investigate how much factory workers at the time made per hour (daily wage divided by hours) versus other professions. They can discuss fairness and equity. A study of women's employment and treatment in the workplace can also follow.

Social movements and social change- The Lowell women's walkout was a benchmark in the history of labor movements and workers' rights campaigns. The students can study various labor movements and note similar issues, demands, and working conditions that many activists fought for. The first, second, and third wave feminist movements can also be included.

Taking Social Action- Examining places in the world where poor and unfair working conditions exist and raising awareness of such places would be a good start. Students can join a campaign to end unfair labor conditions.
Posted by Rachel Mogavero