The Only Boy in Ballet Class


The Only Boy in Ballet Class 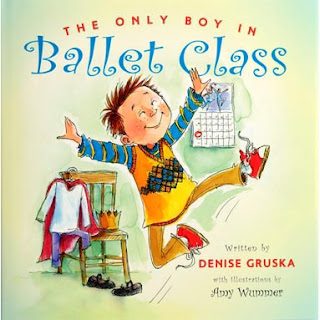 Summary: This book follows Tucker, a young boy who loves ballet but is often teased by other boys at school and even by his uncle for doing something that "is for girls." But Tucker just cannot hide his love for dance - he never just walks, he is always dancing, and he is most comfortable when he is in ballet class, where no one teases him. After his recital, where he gets to play the prince, he is walking home with his family when the boys ask him to temporarily join their football team so they have enough players and don't have to forfeit an important game. When Tucker impresses them all by jete-ing over the defense, the other boys show up at the next day's ballet class.

In the classroom: This book tackles gender roles in a very clear, easy to understand way that is accessible to young children. It would definitely be a helpful part of a larger unit on gender issues, specifically roles and activities that are seen as "only for girls" or "only for boys." One part that I think would be slightly problematic is that during the game, it seems as if Tucker has found acceptance only when he is playing football and acting like a boy is expected to act. However, I think it is very important to stress that the book ends with Tucker still in ballet class and not playing football - he did not give up what he loves. It is also interesting that Tucker gives football a try and the other boys give ballet a try. I think this shows that we all do not love every hobby or sport, but trying new things can help us appreciate them.

Domains of Social Justice:
1. Self Love and Acceptance: Tucker is very proud of his love for ballet, and he is not afraid to be himself and dance everywhere he goes. He feels most comfortable in ballet class even though he is receiving pressure from his uncle and the other boys not to take ballet.
2. Respect for Others: Tucker shows respect for the other boys' choice to play football by not teasing back. His mother helps reinforce Tucker's pride by telling him she loves that he likes ballet. Also, the other girls in Tucker's ballet class accept him and never tease him. Finally, all the boys come to an appreciation of the others by experiencing both ballet and football.
3. Exploring issues: This book clearly addresses gender issues by tackling the idea of stereotypes and activities associated with masculinity and femininity.
Posted by Rachel Mogavero