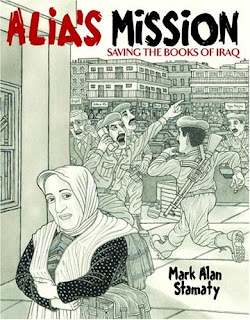 Alia’s Mission: Saving the Books of Iraq
By Mark Alan Stamaty
This book is based on a true story of Alia Muhammad Baker, the chief librarian of the Central Library. Alia loves her job and knows how important libraries are to society. Suddenly, war breaks out in Iraq. She begins to fear for the safety of the books when she sees that artillery has been placed on the roof of the library. At first she pleads with the government to help preserve the books but her requests are denied. So she starts to slowly remove the books from the library by hiding them in her purse and then stores them in her home. The war soon escalates and she decides to she needs others help her in the mission of saving the books and thus preserving the city’s great history and culture. Soon many people are inspired by her heroism and decide to aid her in the mission. Then one night the library is destroyed. Alia is incredibly distressed and faints. When she recovers she is delighted to know that she helped save over 30,000 books! She now is in charge of overseeing the plans of building a new and better library.
I was first drawn to this book because of the illustrations. The book is laid out like a comic book with different panels and speech bubbles. I also enjoyed the fact that the book focused on a female heroine who was Muslim, something that is rarely seen in books. I also enjoyed the way that the book showed Iraq as a modern country. Often people envision Iraq as a barren desert. This book however shows the city of Basra complete with stores, restaurants, cars, apartments, and libraries.
The book’s overarching theme that any person can be a hero is a great way to empower students. The book also offers some resources to contact if one wanted to get involved with helping preserve libraries around the world.
The book is also great for discussing the current war in Iraq. The website:
http://www.teachablemoment.org/elementary/iraqstudyguides.html
offers ways to use the book in order to illicit discussions of the war in an elementary classroom.
The book fits into several stages of social justice. It explores the issues of war and war’s effects.(stage 3) It can be used to empower students with the message that everyone can make a difference and that heroes can be ordinary people. (stage 4) The book also gives resources for ways students can get involved with helping to preserve libraries.(stage 5)
Posted by Rachel Mogavero