Don't Hold Me Back


Don't Hold Me Back 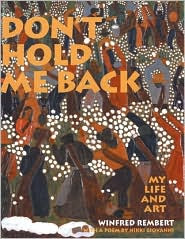 Summary/Reflection: This is the true story of Winfred Rembert, a black man who grew up in Georgia in the 1950’s. Passed from his mother to his great aunt, he lived on a plantation and was forced to work. He talks about a corner on the street where every Saturday you could see any “colored folk” you wished to get in touch with. He made friends here, and grew accustomed to visiting the same shops weekly. Winfred began to make his own toys, so original that the other children would buy toys from the toy shop to trade Winfred for his hand-made toys. As a teenager, he began to get very angry about how black people were being treated. Though his great aunt begged him not to, he joined the civil rights movement. He was arrested with no trial and no charge and put in jail for seven years. Here, he had several odd jobs before finding a project he loved; carving illustrations on leather. When he got married and was sharing his stories with his family, his wife suggested he make this his profession. He now creates artwork carving and dying leather. The illustrations accompanying his story are exquisite.
One quote that I think is extremely important in this book is one that he uses to describe a painting of graves from the lynchings: “I have seven graves here, six for the victims I’ve imagined, and a seventh to bury hate, ‘cause I figured that, if we bury hate, then maybe this won’t happen again.”

How to Use This in the Classroom: This would be a great way to add to a civil rights unit. I could see using this story along with Leon’s Story. The illustration are so personal and unique, there could also be many great art projects to do. Children could discuss how recent this issue is. Winfred’s account takes place between the years of 1950 and 1996, very recent.

Domains of Social Justice:
Self-love and acceptance: Winfred always stays positive. He declares from the age of 12 that he will not be working on plantation his whole live. He loves art and finds a way to make that his livelihood.