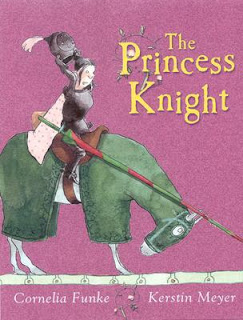 Summary: The Princess Knight is a the story of a princess who is born into a family of boys. Her mother dies in childbirth, so her father raises her like he has raised his sons. She is taught how to sword fight and ride horses. Her brothers make fun of her and her nursemaid tries to persuade her to do more "feminine" activities. Yet, she won't listen to them and she continues to practice fighting every night. One day, her father tells her he is going to hold a tournament for her hand in marriage. A remarkably skilled knight swiftly wins the tournament. When the king offers the knight his daughter's hand in marriage, it is revealed that the knight is, in fact, The Princess Knight, and the daughter wins her own hand!

Reflection: By challenging the norm of many traditional fairytales, The Princess Knight serves as an empowering story for young girls. It provides an alternative viewpoint from other fairytales, placing the female in a position of strength, showing that she is quite capable of completing feats that men can complete. And, not only that, but she does a better job! The moral of this story is that the princess, by showing her father how strong she is physically, also demonstrates her ability to make choices for herself.

How I would use this book in a classroom: I would like to share this story with a class in two ways: 1) as part of a unit on fairytales or 2) as an anti-bullying tool to promote respect between the sexes. I would most likely use the first way with younger grades. I would share typical fairytales with them, then compare these to atypical fairytales (including The Princess Knight). We would explore the gender stereotypes presented in the typical stories, and discuss how these stereotypes are countered in the atypical stories. We would also examine the relationships between these story types and real life-- which story type do the students feel is more realistic? The second way I could share this story with students is situational. Sometimes teachers encountering gender divides in their classrooms- students will claim members of the other sex have "cooties," or "aren't as strong." If I found this was happening frequently in my classroom, I would share this story. I would ask students to role play as the opposite sex, and write a reflection from the point of view as that character. Again, like with the other lesson, I would encourage a discussion comparing this story to real life. I could even extend this lesson over a few days, bringing in professionals of both sexes in a variety of fields, showing equal ability of both sexes.

Domains of Social Justice: Although this book does not specifically refer to all five stages, one could easily use the book to encourage exploration of each stage.

1) self-love and acceptance: The Princess Knight was proud of her fighting abilities, and passionate about continuing to improve them. Her self-love encourages readers to follow their own passions, even if they "go against the grain."

2) respect for others: The king learned to respect his daughter's wishes for making her own choices by the end of the story. This encourages readers to respect their peers' choices.

3) exploring issues of social justice: The issue of sexism is explored in this book, with the main character doing activities that were typically male activities in her society.

Stages 4 and 5 were not addressed in the book, however, in a unit, the teacher could discuss the Women's Rights Movement and encourage social action (such as a letter writing campaign to the author or publisher of a book that is sexist) as part of the unit.
Posted by Rachel Mogavero