Shutting Out the Sky

Shutting out the Sky
By Deborah Hopkinson 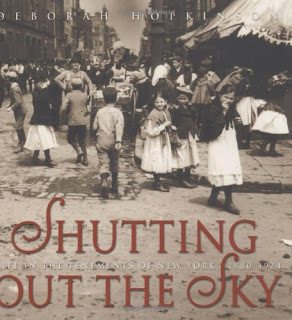 Summary: This book is about life in the tenements in New York City during 1880-1924. During this time immigrants filled the neighborhoods in New York. Hopkinson takes real life accounts of the difficulties immigrants faced from the moment they arrived to creating a new life. The book is broken up into seven different stories that each look at a different aspect of life in America. The book is also filled with real pictures of families and streets in New York.

Reflection: I was drawn to this book at first because I was interested in seeing how Hopkinson would reveal the truth about this time. So many times immigration is presented to students as a time when people from around the world moved to America for a better life. When they arrived they found the freedom and liberties to be amazing and their lives were changed. Hopkinson does a good job of showing how immigration was not an easy task. Instead she shows though people were hopeful it was still very hard to start a new life in America. Everything was not just magically perfect once crossing through Ellis Island. Furthermore, she looks into how Ellis Island was not an all welcoming place. Thus, I think that this book would be a great asset to the classroom. Through this resource students can get an accurate look at immigration difficulties and study where their own cultures and families come from. Students could interview parents or grandparents about the process of entering America and look and reflect on that process. Though things have changed from the early 1900's immigration is still an issue today. The movie that we watched last semester about Hoover Elementary could play a role in this unit. Students could then take social action by analyzing immigration laws today and creating a petition or writing letters to Congress about what they feel is correct.

Domains of Social Justice:
Self Love and Acceptance: This book lends itself to having students examine their own culture and background. Students can look at how their own families came to America and will be able to embrace it.

Exploring Issues of Social Justice: Students can learn through this book the stereotypes and prejudices that were placed on immigrants in America. Students will see how different cultures were treated due to their background and how unjust it was.

Social Movements and Social Change: Students will look at how immigrant groups fought back or how they were forced to feel assimilate. Students can look at current immigration law and whether or not they feel it is just.

Taking Social Action: Students can decide what they feel would be the necessary action to take in regards to immigration. Students can educate others about the process and if they feel inclined they could write letters to the government advocating for what they feel is right.
Posted by Rachel Mogavero