So Far from the Sea 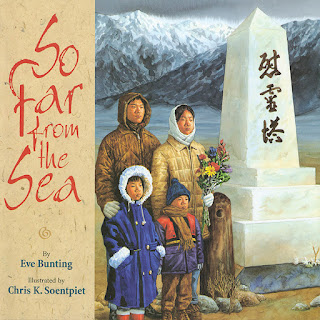 Summary: Laura Iwasaki and her family are paying what may be their last visit to Laura's grandfather's grave. The grave is at Manzanar, where thousands of Americans of Japanese heritage were interned during World War II. Among those rounded up and taken to the internment camp were Laura's father, then a small boy, and his parents. Now Laura says goodbye to Grandfather in her own special way, with a gesture that crosses generational lines and bears witness to the patriotism that survived a shameful episode in America's history. Eve Bunting's poignant text and Chris K. Soentpiet's detailed, evocative paintings make the story of this family's visit to Manzanar, and of the memories stirred by the experience, one that will linger in readers' minds and hearts.


Reflections: While reading So Far From the Sea, I felt as though I was apart of the Iwasaki family and experiencing the journey of visiting the Manzanar War Relocation Center. I am saddened at the thought that many students go through school without learning that the United States set Japanese internment camps and not knowing the struggles this group faced as a result of the attack on Pearl Harbor. The vivid watercolors and black and white photographs provide the reader to take a closer look at the scenes of the past and recall them with an extraordinary gaze. This is a great book that exposes students to what life was like of those interned, which were also American citizens, and were deprived of their freedom.


How I would use the book/curriculum units: This book can be used to introduce students to Japanese-Americans, the internment camps, World War II, refugees, discrimination, multigenerational families, parents who have jobs and homes that were taken them away from them, parents who serve in the military. This book can be tied with those such as Baseball Saved Us by Ken Mochizuiki, The Bracelet by Yoshiko Uchida, Grandfather's Journey by Allen Say, and I Am An American by Jerry Stanley. In Social Studies, the teacher could locate Japan on the map and have a class discussion about the internment camps and studying Japanese American, Pearl Harbor, and WWII. The teacher can bring in a suitcase for display (the more older it looks the better) and have each student list what he/she would pack if he/she had to leave home suddenly -- remember they will have to carry only one suitcase and post this display on a bulletin board. Students may want to discuss or write about the significance of the Cub Scout neckerchief in the story during writing workshop.


Domains of Social Justice:
1. Self-love and acceptance- The teacher can invite a Japanese-American or a WWII veteran to talk with the class and share his or her story. The teacher can ask students if they know anyone who was interned in the camps and have them write a reflection on how this changed
2. Respect for Others-The book could serve as an introduction to Japanese culture by discovering the cultural importance of the objects left on graves--rice cakes, origami birds, cherry branches and so forth.
3. Exploring Issues of Social Justice- Students can learn about issues of racism, segregation, relocation, and freedom that Japanese were faced with.
4. Social Movements and Social Change-Students can use the web sites below to research historical background and pictures of the Japanese relocation camps. Students can build a memorial in their community for all the minority groups who died in the internment camps and will not be forgotten.www.pbs.org/childofcamp/; members.aol.com/EARTHSUN/Manzanar.html
5. Taking Social Action-While Japanese-Americans comprised the overwhelming majority of those in the camps, thousands of Americans of German, Italian, and other European descent were also forced to relocate there. Many more were classified as "enemy aliens" and subject to increased restrictions. As of 2004, the U.S. Government has made no formal apology or reparations to those affected. The following organizations aim to exchange information on Japanese culture, community, history, social services, and public policy issues.
Japanese American Cultural and Community Center, Japanese American National Museum, Little Tokyo Service Center, Rafu Shimpo, Japanese American Network.

Internet Sites:
1. http://www.lib.utah.edu/spc/photo/9066/9066.htm (Shows photographs of what education, living, labor, and buildings were like during this time period)2.http://www.historyonthenet.com/WW2/japan_internment_camps.htm(Provides books, DVD’s, posters on WWII Japanese Internment camps and activities teachers can use)3. http://www.densho.org/learning/default.asp (Provides free multidisciplinary curriculum unit lessons that introduce students to questions of civil liberties in relation to the life experiences of Japanese Americans.)4. http://www.geocities.com/Athens/8420/main.html (Lists many unread web documents that many US history texts fail to mention, a timeline of events, and photographs)