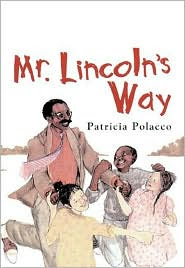 Summary: Mr. Lincoln's Way is a book that discusses diversity, acceptance, and tolerance. Mr. Lincoln is a principal who is loved by everyone in the school- everyone except for "mean 'gene" Eugene. Eugene constantly gets in fights, so Mr. Lincoln tries to find a way to get through to him. One day, Mr. Lincoln notices Eugene watching the birds in the tree, and strikes up a conversation with him about the birds. It turns out that Eugene knows a great deal about birds, so Mr. Lincoln gives him a project- to attract birds into the school's atrium! After Eugene is given this project, he completely turns over a new leaf, until one day, he is sent to the principal's office for calling some of the kids in his class various racial slurs. It turns out that Eugene's father didn't like how Eugene was spending so much time with Mr. Lincoln because he was Black. Eugene's father didn't like people who were different than them, and he constantly voiced his opinions to Eugene. Mr. Lincoln then tells Eugene to look into the Atrium, which is now filled with birds, and to notice how the birds were all different shapes and sizes, but they all managed to coexist peacefully in the atrium. Once Eugene understands that he doesn't have to agree with the things his father says, he's happy again!

In the Classroom: This is a great book to use with the younger grades to start conversations about diversity, racism, acceptance, and justice. In the book, Eugene's father was the person teaching him and influencing him to not accept others, and I know that this is an issue that many teachers struggle over. Is it an imposition for us to be teaching values different from those at home? I think this book is a great way to talk about the issues from a distance, and to get students to think about what they consider is right and what they think is wrong. Mr. Lincoln also presents great methods for conflict resolution, and ways to include students who seem to always be on the outskirts.

Domains of Social Justice:
1. Self Love and Acceptance: In this book, we see Eugene struggle with reconciling the things his father tries to teach him and the way he personally feels. With Mr. Lincoln's guidance, he learns to separate himself from what everyone else tells him is right, and follows his own instincts.

2. Respect for Others: At the beginning of the book, Eugene is a mean and vicious character who calls the other students derogatory names. Eventually, we see him reflecting that he knows the name calling was wrong, and that even though everyone looks different on the outside, it's still possible to exist peacefully together.

3. Exploring Issues of Social Justice: Racism is a huge theme in this book. Mr. Lincoln demonstrates a great approach to talking to someone who says racist comments, and instead of attacking the boy and saying that he's wrong, he engages in a discussion with Eugene that gets to the real intentions behind the racist comments, and gets Eugene to reflect on what he's said. This presents a calm, structured way to talk about racism within the classroom. The discussions should make the students reflect on their past actions or actions of other people, and ways to constructively make them right.
Posted by Rachel Mogavero