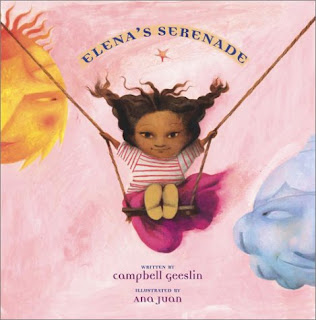 Summary: This beautifully illustrated story is about a little Mexican girl who goes to prove to her father and herself that she can be a glassblower like him too. However, he doesn't think that she can do it because she is too little and she is a girl. So she disguises as a boy and sets out on a journey to find the great glassblowers in Monterrey. Along the way, she meets a burro who was lost, a roadrunner who can't run fast, and a coyote who sings horribly. She helps them gain confidence and they help her get to Monterrey. At her arrival, she is mocked at first but later amazed the glassblowers by using her pipe to make music and glass stars. She then makes a glass bird to fly home and shows her father that she really can do it.

Reflection: This book was an automatic inspiration to me because it has the important theme of "I can do it if I try." Even though her father didn't believe her, she set herself at a risky position and went far away just to prove herself. I loved the colorful crayon illustrations and the facial expressions on the characters' faces. I also liked how it was a dual-language book because there were many terms that were said in Spanish [they were defined at the beginning of the book].

How I would use this book: This story leads to meaningful conversations about topics such as confidence, determination, and believing in oneself. It can be integrated into social studies, Spanish, word study [many thematic terms can be zoomed in on], art, music, and role-playing. For example, the girl had discovered that she was able to make beautiful music with her pipe and it led to her surprise that she can also blow beautiful glass stars. Students can discover a talent that they have and use it to inspire others to gain confidence and teach one another. For a dual-language class, students can learn the meanings of the words in Spanish and use it in their writing. Artistically, they can use guided imagery to make their own representations of the story. I think this book can also help a lot with teaching students about another culture.

Domains of Social Justice Education: 1. Self-love and acceptance: The little girl clearly shows that even though she is told that she is a girl and is too little to be a glassblower, she is determined to prove that she is wrong, even though she has never done it before. She accepts herself for who she is and embraces her culture. 2. Respect for Others: When encountering the animals who face struggles and humiliation, the girl does not laugh but instead uses what she knows and loves to help each one. 3. Exploring Issues of Social justice: This book explores general roles or sexism and physical attributes. 5. Taking Social Action: Elena definitely creates change by proving to her father that she indeed can be a glassblower and that she turns out to be a great one. The other characters think she is superb too, only they do not know that she was a boy in disguise.