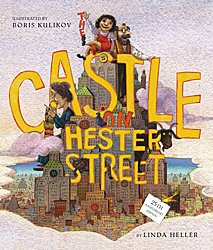 This picture book looks at the multiple perspectives surrounding immigration. The story is about a little girl named Julie, whose grandparents are telling her about her experiences immigrating from Russia to the New York City. Her grandfather tells her a more idealistic and imaginative version of their journey, while her grandmother informs her of the more realistic and unpleasant version. The story flows in a way where the grandfather will tell his side on one page and then the next side will be the grandmother's point of view on that same aspect of the trip.
I think this story is really great to use in the classroom, because it really allows the students to see the two side of the story, and discuss what they think one might be more accurate than the other. The grandfather's story is more in line with the common misconceptions of what immigration was like, where as the grandmother highlights more of the negative yet in a way more truthful side. It also goes through the process of what one had to do to immigrate to the United States, while still making it interesting and intriguing for students by using beautiful illustrations and a funny conflicting story line. I think this is a great book for any grade class learning about immigration.

How Would I Use this in the Classroom:

Like I said previously this is a great book for any grade classroom studying immigration, because it really allows the kids to see the different viewpoints surrounding the issue. It is a common misconception to view immigration as this amazing journey to a country with gold paved roads, but this book allows kids to see a more realistic viewpoint in comparison. I think the book illustrates very well the process of what people went through to come to the United States, and it would be a great sequence book to use. It also brings up many interesting discussion topics like, "Why did people want to come over to the United States?" and for some of the older children discussing why there is such differences in the two stories. I really like the idea of the multiple perspectives and talking about how a lot of times there are two sides to a story surrounding many of the social justice issues.
Also, if you are doing a unit on immigration a interesting activity to do with kids surrounding the reasons for immigrating would be through a stimulation activity. I did this with my students last year and it worked out really interestingly. We had split the class in two groups (one smaller than the other) and had the kids play a game where they were suppose to make little pictures on index cards to get points. For the larger group we gave a bunch of markers and index cards to and for the smaller group we gave them one marker and not enough index cards and told them their cards were worth less points. Instantly this became a problem with the students in the smaller group, and they were saying how unfair it was. After about 5 minutes we brought them back to the rug, and asked the smaller group of students if they wanted to be in the other group, they all said yes. We told them that during immigration there was countries that had really unfair rules and not enough supplies and as a result it made a lot of people want to come to the united states where they heard that the "streets were paved with gold". We later discussed how this was not the case, but the activity really helped the kids understand why someone might want to immigrate to another country.

I think that this mostly falls into the Respect for others stage, because it really allows the students to see the perspectives of someone who is immigrating to another country and the process that they have to go through. It also helps them see the more negative aspects of that journey.
I also think that this could fall in the the Exploring Issues of Social Justice because it talks a lot about the common misconception of what it was like to immigrate, and talking about the oppression that many immigrants had to face.

Where you can buy the book:

You can either buy it from here or go to Strand and get it for around $6.95 (I think- it was somewhere around that...VERY cheap!)
http://www.amazon.com/Castle-Hester-Street-Linda-Heller/dp/0689874340
Posted by Rachel Mogavero