Zlata's Diary: A Child's Life in Sarajevo by Zlata Filipovic 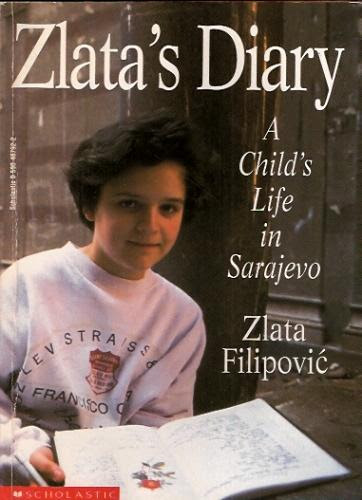 I keep thinking about the march I joined today. It's bigger and stronger than war. That's why it will win. The people must be the ones to win, not the war, because war has nothing to do with humanity. War is something inhuman.

Summary
Zlata's Diary was written during the Bosnian War by a girl who was then turning eleven years old. Zlata Filipovic, the author, wrote a series of entries in her journal, which she named Mimmy, from 1991 to 1993. The beginning starts as any other fifth grader’s journal would. Zlata writes about the daily events of her life; going to school, playing with friends, being with her family. But her entries are soon filled with the retellings of the horrors she is facing living in Sarajevo, which becomes under siege. Zlata’s Diary documents the appalling aspects of war witnessed from the innocence of a child.

Reflection
I first read Zlata's Diary when I was in the fifth grade. I remember feeling shocked about the things this young girl, who was exactly my age, was experiencing. The book made a big impact on me, which is why I chose to reread it as an adult. Zlata’s Diary is written from a child’s perspective. Yet while the language is that of an elementary school student, the content is something no child should have to write about. Because this is told in a first person point-of-view, Zlata makes it easy for us to empathize and identify with her though she is experiencing things foreign to most people. The diary style employed invites intimacy and allows for a close connection with the text.

In the Classroom
I would use this book in older elementary school grades. Children around that age can identify with the act of writing in a diary or a journal. The language lends itself easily to children of this age, as well. Zlata’s character development as the book progresses is an area of reading and writing that can be deeply explored. An entire unit can be developed around Zlata’s Diary to learn about the Bosnian War. Zlata’s experiences and the war itself can also be learned with and compared to other wars dealing with genocide and religious differences, such as World War II and the Holocaust. The book can be used as an outside resource to learn about these topics.

Domains of SJE
Self-love and acceptance as well as respect for others are explored within the book. Zlata has a hard time understanding why anyone would want to hurt others based on their beliefs and practices. She sees war as a completely useless and horrible act. Discussions with her family and friends are retold to readers that address her confusions and anger about what is going on around her. Themes of social justice are highly present within the book. Students will read about the hardships and triumphs that Zlata undergoes to create social change and take action for what she believes in.

To learn more about the book visit the Wikipedia page. Buy it onAmazon or Barnes and Noble.
Posted by Rachel Mogavero