Ten Boys Who Changed the World


Ten Boys Who Changed The World 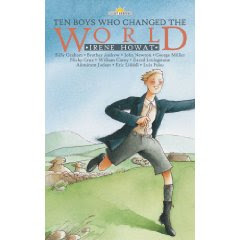 This book gives a brief history of ten men (never fear, there's another book in the series that talks about women!) who addressed social justice issues of their day. Some of my favorites were Billy Graham, who worked to bring about racial reconciliation in the deep south; George Muller, who started orphanages when he realized the children in his village were starving; and Brother Andrew, who worked for the freedom of those living in the Soviet Union. At the end of each chapter there is a brief page of facts that give background on the social justice issue being addressed and information on ways the reader can join the ongoing fight against this particular injustice. I loved this book because it not only shows children ways others have fought to right the wrongs they see in society, but also reminds them that these wrongs still exist and gives practical suggestions on steps they can take right now to emulate these great men.
From a social justice standpoint, this book is good because it presents heroes from a variety of cultures, including Puerto Rico and Argentina. It also presents examples of people who addressed issues in their own country and those who took on world problems. Each chapter talks about individuals and individual encounters rather than dealing with any racial, classist, gender, etc stereotypes.
This book would be an invaluable resource in a character study because it focuses on the character traits of the men as children that later influenced them to take on social justice issues. Students can study different aspects of personalities as well as common threads that they see in people who make a difference in their society.
I could use this book in a variety of ways to teach a variety of subjects. It can be used in a literacy or social studies context, of course, but individual chapters focus on other subjects as well. For example, the chapter on David Livingston focuses on his exploration of the continent of Africa and can be used to teach geography and get students excited about exploring. The chapter on George Muller includes a lot of math concepts as he struggled to pay for the food for the orphans he cared for and can become the basis for word problems. The applications of this book are as varied as the lives of the people in it!
Posted by Rachel Mogavero

Email ThisBlogThis!Share to TwitterShare to FacebookShare to Pinterest
Labels: Element 2: Respect for Others, Element 3: Exploring Issues of Social Injustice