The Shaman's Apprentice: A Tale of the Amazon Rain Forest 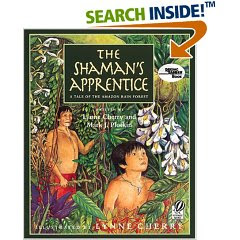 The Shaman's Apprentice: A Tale of the Amazon Rain Forest
by Lynne Cherry and Mark J. Plotkin

Summary:
The Shaman's Apprentice tells the story of a young boy named Kamanya who lives in the Amazon Rain Forest with his family. We find the boy has a fever at the beginning of the book, and his parents decide to take him to the local Shaman to help him get better. Meeting the Shaman, and becoming cured of his fever after spending some time with him and his medicines, Kamanya becomes intrigued by what the Shaman does. While other children his age play, Kamanya likes to visit the Shaman and learn about the different plants that are used to help cure people of illnesses.
One day, however, a stranger comes to Kamanya's village, who has an unknown illness that the Shaman is not able to cure. Many people are dying of this sickness, and soon enough, we are introduced to missionaries who come to spread their religion and give treatment to those with the strange disease. The disease is given a name (Malaria) and the missionaries provide the Indians with white pills containing quinine. Soon enough, many in Kamanya's village begin adopting the ways of the missionaries by wearing similar clothes and buying things that the missionaries offer to sell. Kamanya feels sad that his village no longer respects the Shaman the way they used to, but has faith that they will see the Shaman's brilliance. Gabriela, another stranger, visits Kamanya's village, but she has come to learn more about where Kamanya and his people live. She also informs them that the white pills used to cure malaria contain an ingredient taken from the very place that Kamanya and his people live, the rain forest. Once again the Shaman's respect is restored, and the villagers realize the value of having a person amongst them with such thorough knowledge of natural medicines. Gabriela helps Kamanya and the Shaman make a book of all the plants, and Kamanya goes on to become the future Shaman.

Reflection:
I thought this book was really powerful, in that we visit a main character and a setting that is not normally visited through a children's storybook. What made it even more compelling was the fact that Kamanya's Indian culture was legitimized and was shown as something that has provided such benefits to society, ie medicine. A book like this helps children understand that every culture, no matter how uncivilized it may be painted to be, provides our world with goodness in one way or another. What I also liked was the portrayal of Kamanya as a child with faith in his traditions and cultures - who, even though many in his community turned away from the medicine man, believed that there was real significance to this character in his community.

The Shaman's Apprentice definitely hits on Levels 1 and 2, as students can apply Kamanya's story to their own lives and recognize their own culture's value, while also learning about a different culture and respecting it for its contributions. I could also see Level 3 being addressed a little bit, in that as a class we could discuss the fairness of what the missionaries did (the positives and the negatives)...I'm not sure how to extend it beyond that though.
Posted by Rachel Mogavero