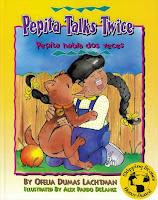 Book: Pepita Talks Twice/Pepita Habla Dos Veces
Author: Ofelia Dumas Lachtman
Illustrator: Alex Pardo Delange
Age: Grade 1 +
Purchase info: Amazon
http://www.amazon.com/Pepita-Talks-Twice-Habla-Veces/dp/1558850775
Other websites:
http://charactered.ocde.us/ICE/lessons_html/pepita_talks_twice.html
Summary:
This children’s book is appropriately written in both English and Spanish as it follow the story of Pepita, a girl who faces some qualms about being bilingual. Pepita became frustrated when her ability to speak both Spanish and English meant she had to consistently translate for her friends, family, and neighbors. She finally decides that she will no longer speak Spanish (no longer speak twice).
Pepita then faces a myriad of unanticipated problems when she limits herself to only speaking English. She could not ask for tacos with salsa or call her dog’s name, Lobo because they were all Spanish words. She could not help the new students at school, sing Spanish song with her friends, or listen to the stories her grandma told her in Spanish. The turning point was when her dog had chased a ball into the road and was about to be run over. Pepita decided to scream the dog’s Spanish name (Lobo) and tell him to come back in Spanish, the dog turned back just in time. She then realize that benefits and joys of being able to speak both English and Spanish.
How to incorporate in the classroom/curricular units: The underlying story line is good for exploring ‘perspective taking’ and other literally elements. Teachers can use this book to talk about Pepita’s perspective and why she no longer wanted to speak Spanish and ultimately why she decided to come back to it. Along that same line of thought it could be used to teach students about weighing the pros and cons of a given situation. This book would also be good to look at character development.
Social Justice Education: This book addresses the following stages of Social Justice Education.
Stage 1: Self Love and Acceptance
Stage 2: Respect for others
Stage 3: Exploring Issues of Social Justice à Bilingualism
This book would be good to explore the issues of bilingualism and it also captures the idea of biculturalism. This book specifically addresses the issue of identity and multicultural world that many children in the United States are a part of. Students can discuss about similar issues that may face in their own lives where they might be struggling with a certain part of their identity but how they have realized that it is a significant part of who they are.