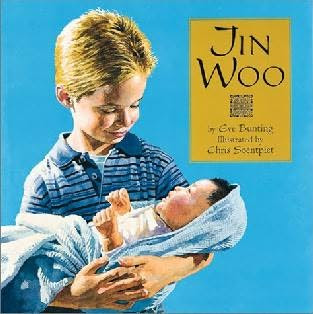 Title & Author
Jin Woo by Eve Bunting
To Purchase & More Information
http://search.barnesandnoble.com/Jin-Woo/Eve-Bunting/e/9780395938720/
http://www.amazon.com/Jin-Woo-Eve-Bunting/dp/0395938724
Summary
Author Eve Bunting tells a story about a White family, including a Mom, Dad, and their son named David who is adopting a baby from Korea named Jin Woo. Initially, David does not like the idea of having another brother in the family because he likes the family the way its always been. Since a lot of attention is given to Jin Woo, David feels like no one loves or cares for him anymore. However, his mother has written a letter to David from Jin Woo's point of view, which explains to David that although there is a new baby in the family, he is still loved unconditionally. After the letter, David tries harder to help take care of Jin Woo.
My Response
This is a very typical story where a White family is portrayed as a model family that adopts a child of a different ethnicity. The Korean traditions that are mentioned in this story are accurate, however they are only briefly mentioned. The illustrations in this book can also be considered offensive because as we discussed in our book club and with Bree, the way that the Koreans were drawn makes them look crazy.
In The Classroom
This is a very weak book regarding multicultural education, however if I were to use it in my classroom, I would use it to discuss different types of families. Specifically, by studying the type of family that is portrayed in this book, the students will also learn about adoption and orphans, and how their lives might differ from those children who are orphans.
SJE
2. Respect For Others
- In the book, the Korean traditions of Jin Woo are respected although they are only briefly mentioned. Since each student is different, whether it is regarding their ethnicity, family, abilities, etc., this book teaches that to interact with others, it is important to learn about and respect other's background.
Posted by Rachel Mogavero