If America Were a Village


If America Were a Village 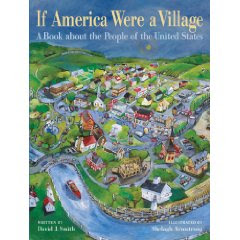 If America Were a Village: A Book about the People of the United States
by David J. Smith
(available in bookstores and amazon.com)
Smith decreased the number of Americans in the United States from 306 million to 100 people. He broke down the population so America became a village of 100, and he gave figures and facts that were easier to understand. "In this village: 75 are white, 12 are black...82 speak English as their first language..." He talks about race, language, religions, jobs, ages, wealth, energy use and health. As I was reading the book, I was fascinated by the amazing facts I was unaware of.
This book falls into step 1 and 2 of the social justice education. The students develop love and acceptance for themselves and others. Through this book, they will learn to appreciate the diversity around them. Teachers can use this book in math to teach statistics, ratio, and facts. Students can study the population of United States and explore diversity.
As a fun activity, the students can create their own book "If Our School Were a Village." They can survey and collect data on students' race and langauge. Instead of collecting data on wealth and religion, they can survey their favorite foods, TV shows, sports, and other topics that students are interested in finding.
Posted by Rachel Mogavero