How My Parents Learned to Eat

How My Parents Learned to Eat 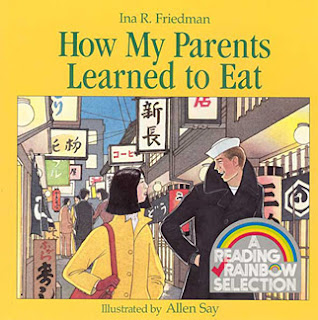 By: Ina R. Friedman
Summary: In this story, a young girl explains why at her house, sometimes her family eats with chopsticks and sometimes they eat with forks and knives. She explains that when her parents met, her mother was a Japanese schoolgirl and her father was a sailor stationed in Japan. There, the two met and spent afternoons walking around together. However, neither of them knew if the other could eat with the utensils of their own cultures so the two never had food together. One day, the girl’s father found out he was leaving in three weeks and so he decided that he needed to have a meal with this woman he loved because he wanted to marry her. So, he asked her out to dinner and she said, “yes”. Worried he would make a fool of himself he learned to eat with chopsticks and similarly she learned to eat with a knife and fork. Finally, the two meet and have American food one day and decide on Japanese food for the next. The man and woman eventually got married and used both types of utensils in their house.
My Review: I think that this is a wonderful book that explores the idea of every person being different. The part of the story that discusses how the girl’s mother and father were both nervous to eat with the other because they did not know the cultural norms reflects on most people’s fear and uncertainty of other cultures. However, both of the girl’s parents worked individually to learn about the other’s culture. This story is wonderful because it reflects the normal uncertainties that people face about other cultures, yet shows how through understanding and education, understanding can become easier and interesting.
In the Classroom: This book is a great way to teach children that it is okay to be nervous about new and different cultures than one’s own, but through learning about it, people can become friends and understand one another better. I think that this book would be a great way to integrate a multi-subject study about culture and the different cultures in the classroom. By exploring the different cultures in the classroom through food, the students would have the opportunity to learn about different cultures as well as understand their own culture as well.
Posted by Rachel Mogavero