The Greedy Triangle, by Marilyn Burns 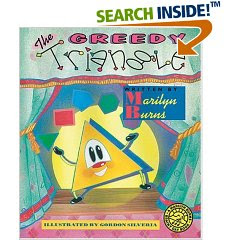 Summary: There was a triangle who had many different jobs. He would do these jobs everyday, and one day he got bored and wanted to be something different. He wishes to experience life from the point of view of a shape with more sides such as a quadrilateral, pentagon, etc. So he visits a "Shape-Shifter" who transforms the triangle into a series of polygons with increasing numbers of sides. Eventually he almost becomes round. AT this point he relies that there was nothing wrong with just being a triangle and goes back to the “shape-shifter” and becomes a triangle again.

Reflection: The first thing that attracted me to this book was the title. I saw that you would be able to teach a numerous lessons off this one book. Obviously math, but also greed. And once I started to read it I figured you can also tie it into a cultural study by using different shapes instead of people to show the kids how all the shapes have a jobs and together they make up the world just like we do. We are all different and together we make up a world of our own.