The Golden Rule by: Ilene Cooper 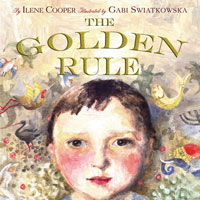 Summary: This book is about the rule that has no boundaries which is to "do unto others as you would have them do unto to you." This book begins with a boy noticing a billboard with this message written on it and he questions his Grandfather as to the meaning of the quote. His Grandfather then goes on to explain to him the rule and how it is worded differently. After he explained how it is a universal rule that is found in almost all religions for example, Christianity, Judaism, Hinduism, Buddhism, etc... So then the boy questions how could he follow the rule and the Grandfather gives him examples of what to do if there is a new kid in class or if he was getting bullied. Then the kid came to the realization that not everyone follows that rule, but that it has to start with him.
Reflection: I liked this book the moment I saw the title because I know of this golden rule and the illustrations are very colorful and soft. I was a bit on edge when I hit the part where the Grandfather begins to talk about religions simply because this is a touchy subject in a public environment but then I realized that his use is simply educational. Also I caught myself because I had to remind myself that the idea behind this class is to not be afraid to tackle the touchy subjects in an educational manor.
In the classroom: I would use this book in terms of respect for others and in terms of social action. If I read this book aloud to say my first graders I could focus on the main idea of how to respect others because this is how we would like to be treated. I could use the example of the new kid and bullying or teasing and how we should behave. In the same respect I could also focus on the part where the boy begins to realize that not everybody follows this rule and when the grandfather asks why is he saying that, he responds that he has made the observation that if the golden rule were to be followed by all then there would be no war. This fact I would help them expand and then I would introduce a place where war is happening, specifically I was thinking of a place where genocide takes place like Darfur. We would learn about this country, the reasons for the issues that take place there, and together decide how we can become involved. I also said that I would use this book as a read aloud in High School, specifically for world history as an introduction to those religions.
Mayrovy De Leon
Posted by Rachel Mogavero