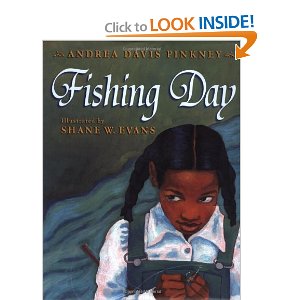 Summary:
This book was about a black girl who goes fishing with her mother. They have trouble catching fish. While they are fishing a white man and his son come to the same river which is called the Jim Crow river. It glosses over what Jim Crow Laws were. Eventually the little girl is able to catch a fish, but the boy is unable, and therefore he gets angry and starts to throw rocks at the little girl. The mother and the daughter decide to go home, but before they leave, the little girl gives the boy her special bait and he ends up catching a fish.

Response:
I enjoyed the book, because it was not the usual theme of a white person having to do something spectacular for the someone that is a minority race to achieve something. One thing that bothered me was that the black person had to be the bigger person. The little girl was the one that had to swallow her pride despite the fact that she was wronged.

In the Classroom:
I would use this book in the classroom to introduce what Jim Crow laws. This book touches upon the Jim Crow laws, but did not go into depth. I could use this book as a read-aloud at the beginning of a unit on segregation. This book could be used to stir up discussion about the idea of segregation and to gain prior knowledge of what the students know and want to know. A KWL chart could be created to have in the classroom to have the students continue to think about and to challenge their ideas of race, segregation, and discrimination.
Posted by Rachel Mogavero

Email ThisBlogThis!Share to TwitterShare to FacebookShare to Pinterest
Labels: Element 2: Respect for Others, Element 3: Exploring Issues of Social Injustice