The Color of My Words


The Color of My Words By Lynn Joseph 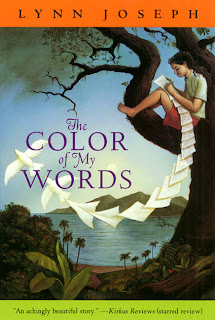 Summary: Ana Rosa, a twelve-year-old girl, tells her coming of age story, through her passion, words.  In Dominican Republic, writers are never allowed to express themselves freely and Ana Rosa's family knows the struggles that she will have to face and suppress her talent.  One day, this all changes and Ana Rosa is able to help her community and is granted the greatest gift she could ever receive, a notebook of her own.  Unfortunately, she shuts herself down after witnessing the murder of her greatest hero and supporter, her brother.  Read this book and experience the ups and downs of this world from a Gri Gri tree.

Reflection: This book is ideal for fourth-graders.  Our group was moved by Ana Rosa's inspirational story of how she had to overcome such difficulties.  This book allows children from all cultures connect to the main character.  We believed that it can be used to inspire discussions on Hispanic culture, poetry, death and activism.  It can also lead to discussions on the different roles Ana Rosa's family members had, which is very important in this book.  We enjoyed it and hope that your future students will too.

Self-Love and Acceptance -  We would allow students to learn about Hispanic music, beginning with merengue, because it is heard throughout the book and plays a very important role in not only Domican culture but especially in Ana Rosa's life.  We would want students to gain a respect for cultures other than their own.

Exploring Issues of Solution - As Americans, it is easy for us to take things for granted.  We rarely think that doing laundry would be such a tedious task that would take the whole day; however, for Ana Rosa and her mother it does.  We would want to make students aware of what they have and understand how classism affects Dominicans.

Taking Social Action - Guario, the hero of this book, dies a tragic death defending his communities rights.  We would want to show students that activism does not equal violence and find non-violent solutions that do not resort to death.  We would also want to show the role that media has on activism and how it can help or hinder a cause.
Posted by Rachel Mogavero