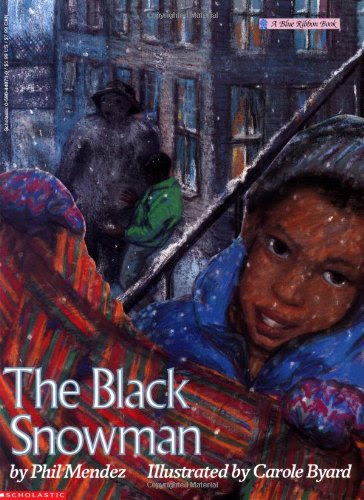 Summary: The Black Snowman, written by Phil Mendez and illustrated by Carole Bayard, is a heart- warming tale of a child's journey towards self- love and acceptance.

The story, laced with its colorfully rich illustrations, begins long ago in western Africa. Here, an aged storyteller wraps his magic kente close to him, and summons the tales of memories past. The village children grow up and have children of their own, who also run to hear the lore of the storyteller. "But one day the storytelling comes to an end."

The village is seized by invaders and the African people are taken from their home and sold into slavery. All is lost. Even the magic kente is lost. "A thousand uses fray its delicate threads until it is discarded as a useless rag. But it still possesses the magic... it still has wonders to perform."

Cut to modern- day New York City. Jacob Miller is a poor black boy growing up in the projects. He lives with his mother, who tries her hardest to make ends meet, and younger brother Peewee. During the first part of the book, Jacob explores several issues of social justice, repeating the words that he has heard others say: "Everything black is bad! You ever hear of the Black House? No! But there's a White House. A white tornado cleans your sink; a black one destroys your house! And how about the fairy tales? It's the white knight who wins, the black one who loses. Good magic is white; black magic is bad."

Peewee implores his big brother to play in the snow with him, and Jacob begrudgingly obliges. As the two boys run out into the alley, Peewee asks Jacob to build a snowman with him. Jacob retorts, "We can't build a snowman. Just look look at that snow. It's watery and black from all the people trampling on it." However, Peewee pesters Jacob until he helps his younger brother sculpt a black snowman.

From the trash can, Peewee pulls a discarded scrap of cloth, the magic kente. Embraced by the magic of the kente, the snowman begins to talk. Jacob refuses his kind words, but soon starts to ponder them. "So black is bad, huh? What is more important in a book-- the white pages, the black words, or the message the book holds? The heavens are black, and the universe is held in it. Should we call the earth bad because it is cradled in blackness?"

Through the courage and sacrifices of the snowman, Jacob not only gains knowledge of his ancestry, but new apprecation for his culture, and most importantly, self- love and acceptance.


Opinion: I was particularly moved by the messages and illustrations included in The Black Snowman. I recommend this book to anyone who is interested in indulging him or herself in a blend of contemporary realism and historical fantasy.