SIT-IN How four friends stood up by sitting down 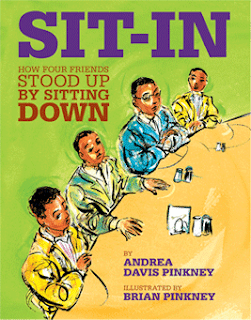 Summary: This story is about 4 young black men who wanted to take a stand. Listening to Martin Luther King's words about meeting violence with nonviolence, the men sat at a "whites only" counter and placed an order. At first everyone ignored them and kept telling them to leave, whites only! They did not move. They came back everyday. They were dressed in their best and were polite. Everyday more people joined their sit in, even some white people. People were getting frustrated with them and would throw food on them and say mean things. Then finally John F. Kennedy stepped in and told congress to take action against segregation. Thus the Civil Rights Act of 1964 was created.

Element 4: This relates to element 4, Social Movements and Social Change, because this story shows readers what it was like being part of the sit-in. It addresses the issues of civil rights and segregation. It shows readers what can happen when people come together and work towards a movement. It helps students understand that by working together people can create change.

Activity: After reading this book with my class I would show them videos of Martin Luther King Jr. giving speeches and inspiring people.  Then we would discuss how Martin Luther King Jr. inspired these 4 men to take a stand in what they believe in. Then I would have them draw their favorite part from the story and write why they chose this part and how the men inspired them underneath the picture. Then I would let the students share their work with each other and explain to each other why they did what they did.