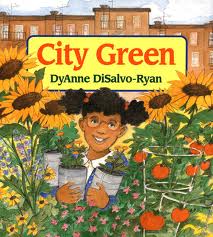 This book is about a little girl named Marcy who lives in a nice neighborhood with her Mama. In their town there is building that has been unsafe and abandoned for many years. Marcy's friend Miss Rosa, mentioned to her that the neighbor Old Man Hammer used to live there along with other neighbors in town. It seems that every time Marcy asks about the building, Old Man Hammer gets angry and Marcy thinks it's because he misses his old home. The next thing you know, two men in suits came in to town letting the people know that it was time for the dear old building to come down because it was unsafe. Every one gathered together near the window to see the building crumble and leave nothing but dirt. The space where the building was became an empty lot and the neighbors were a little sad to see that nobody saved it. When Spring had arrived, Marcy and Miss Rosa gathered empty coffee cans and filled them with seeds and they would walk to the park to get dirt and fill the cans. They enjoyed the idea of growing plants and living things in the lot, but they needed an approval of the city first, so they gathered many signatures and had started a petition. After a trip to City Hall and a fee of a dollar, it was approved and now Marcy can continue to grow in the lot. After Marcy and Miss Rosa started, Marcy's mother wanted to join in and help and day by day neighbors and the entire community planted seeds in the lot. The excitement grew and even one day Marcy saw Old Man Hammer put seeds in the soil to grow something. By the end, the lot became a beautiful garden with the help of the community.

Element 5 has to do with raising awareness and I find that City Green is a good example to use in a classroom when discussing this topic. In the story Marcy begins gathering seeds in a can and trying to make the empty lot a better place. She starts with her friend Miss Rosa and little by little neighbors and the community come together to create a beautiful garden. Without everyone working together, it would have made it harder for only Marcy and Miss Rosa to plant fruits and flowers. The excitement of everyone coming together to make this empty lot a nicer part of their neighborhood made everyone want to come together and help. It is important to have students see how one child or person can make a difference when people come together. Since there was no building anymore, it looked sad and empty with just the lot and Marcy could just imagine the beauty of a garden in that space and she made it happen with the help of her neighborhood.

I would begin my lesson by showing my class the cover of the book and having them predict what they think the book is going to be about. After we have read the book, I would start with a discussion on what it is like to be helpful and ask my class to share any personal stories of when they helped someone and how they felt after they helped. After my discussion, I would then like to come up with some examples of how we can change and help our community be a better place. Then I want my students to return to their desks and brainstorm some ideas on paper. I would then walk around and help my students pick their strongest idea and have them use it. I would then pass out a sheet of construction paper of their color choice and provide markers and crayons. At the top of the paper they will write " I am going to help my community be a better place by..."and they will write their idea at the top. In the middle, they will have to draw an illustration of how they are going to help their neighborhood where they live, in school or any other place they can help. At the bottom of the page under the picture it is going to say how they are helping. For example, at the top the page it will say I will help my community be a better place by... and draw a picture of him picking up trash around his house, then at the bottom it will say "... By picking up trash I see near my house."  Once my class has finished their project, I would have us sit on the rug and have each student share their posters and briefly explain how they will make their community better and why it's important.