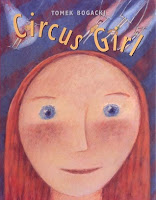 Summary: Element 5 is about raising awareness, and how to engage students in understanding different issues around the world. This book talks about being kind to one another and how one new girl in school can change everyone else's perspective on friendship. This book is about a circus coming to town and a little boy and his classmates are very excited. There is one boy named Tim who is the only one who is not looking forward to the circus coming. Tim is quiet and does not have many friends in school. A new girl, who is part of the circus, joins the class while the circus is in town. She sits down next to Tim, and everyone was surprised. After school, all the children go to the circus to watch their new classmate. All the children are impressed by her talents. In school the next day, Tim asks a boy to borrow his eraser. The boy responds abruptly saying no, but then Circus Girl asks to borrow the eraser and he gives it to her. She then hands it to Tim. The boy felt guilty about what had happened and ended up apologizing to Tim and let him keep the eraser. The boy and Circus Girl become friends and one day when he is watching Circus Girl at rehearsal, he spots Tim and hangs out with him while they wait for Circus Girl to finish rehearsal. Tim becomes comfortable with his new friends and shows them things he enjoys. While the circus was in town, the three new friends spent as much time together as they could.When Circus Girl had to leave, it was bittersweet, because although she was leaving, the two boys who had never spoken before, became best friends, all because of Circus Girl.

Element 5: Element 5 has to do with raising awareness and I believe this book shows a good example of what raising awareness is. Tim is a shy kid who doesn't have any friends. The kids in the class are typically mean to Tim. When Circus Girl comes, she is nice to Tim and sticks up to the kids who are mean to him. One situation in particular is when Tim asks a boy to borrow his eraser and the boy snaps at him and says no. Then Circus Girl asks for the eraser and the boy gives it to her and she gives it to Tim. The boy is stunned and apologizes. This scenario promotes kindness and acceptance and I think that is a very important quality for students to have, especially young students, who are still learning right from wrong. At the end of the book, the narrator says that he is happy to have met Circus Girl because if it wasn't for her, he never would have found a friend in Tim. This shows how kindness and acceptance is crucial in students having successful friendships.


Activity: We will have a class discussion on bullying and what it means to be nice to one another. Students can share examples of when they have felt that someone was mean to them, or when they have felt they were mean to someone. We will talk about in the discussion, ways to improve the way we treat each other and how important it is to treat each other with respect. The students will then be paired off and told to talk about what they would do if they were in Tim's situation. I will give them partners. The assignment would be "How would you feel if you were Tim, and how would you react if someone was mean to you? You will then talk about what you would do if you saw someone being bullied." After 5-10 minutes of discussion, we will get back into a class discussion and talk about our responses. I will write on the board how the students would feel if they were Tim. I will also write down how students would react if they saw someone else getting bullied. I would have students copy from the board what they would do if they ever saw someone being bullied, so they can reflect on it, if they ever come across that situation.
Posted by Unknown