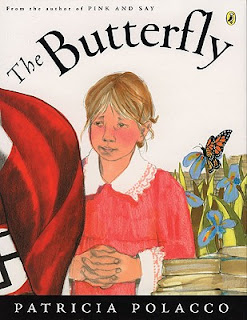 
Summary: The butterfly is about a young girl named Monique who resides in France at the time of the Nazi invasion. One night,  Monique discovers a Jewish girl named Sevrine in her bedroom. Sevrine and her family has been hiding out in the basement of Monique's house from the Nazis. The two girls become friends easily while Monique continue to help them hide. Unfortunately  Monique and Sevrine are seen together by a neighbor and discovered. After this point, Monique's mom has to step in and help Sevrine and her family escape from the Nazis while putting everyone's lives at risk.

Element 4: This book represents Element 4: Social Movements and Change in the sense that the characters in the book stood up against the oppression of the Nazi's. Instead of just turning Sevrine's family in and not putting their own lives in danger, Monique and her mother chose to take a stand, help them, and even put their own lives at risk. They did this in the hopes that some kind of change will come out of their actions, however significant it may be. This act of kindness also shows extreme courage on their part. Just like in any other social movement that resulted with a change in the events, the characters in this story knew that they had to be brave enough to stand up for their rights, and take a stand in what they believed in to make change a possibility in the future.

Activity: This book can be incorporated into the classroom during a unit on the Holocaust. An activity one can do with this book for younger students might be to have them draw their own butterflies, just like the one Sevrine sent to Monique at the end of the story. For the older students, an activity one can do with this book might be asking them to choose a character in the book that they felt made a significant change in the lives of the other characters in the book. At this point, they will proceed to write a thank you letter to this person to show their gratitude.
Posted by Gozde