Brave Girl: Clara and the Shirtwaist Makers' Strike of 1909 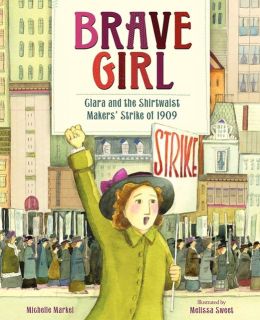 Summary: Clara Lemlich immigrated to New York City from Ukraine as a young girl with hopes and dreams of creating a good life for herself in America, the supposed land of opportunity.  However, she quickly discovered that it wasn't what she had anticipated. Instead of having the chance to get a good education like girls her age should be entitled to, she was forced to work in a factory as a garment worker. This didn't stopped her from becoming the person she had wanted to be.  She managed to go to school at night, and taught herself English. Eventually, Clara became outraged by how her and her fellow workers were treated, and decided it was time to take action.  She gathered her factory friends together, and organized the largest walkout of women workers in United States history.  This book illustrates the tale of a young girl who came from nothing who inspired others to make a change, and fought for their rights as woman.

Element 4:  Clara's story perfectly exemplifies Element 4 in the sense that she was an ordinary person who wouldn't accept her current circumstances knowing they were unjust and inhumane.  She realized that women shouldn't have to be exposed to physical abuse, low pay and long working hours.  She fought for these freedoms by uniting and inspiring other women at the factory, and protesting against this cruelty.  This book shows how anyone can make a difference by coming together and fighting for what you believe is right.

Activity:  A great activity to incorporate into your lesson using the book would be to put your students into small groups of 3-4.  Using the content we read about in the book and a short lesson on the actual strike of 1909, students will make their own protest signs.  Each sign must be creative and represent slogans that demand fair working conditions.  These signs will be displayed in the classroom on the walls.