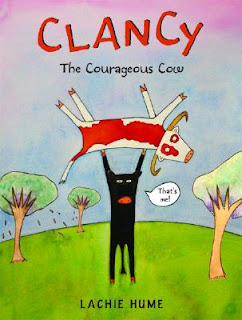 
Summary: When Clancy was born to his Belted Galloway parents, they were very excited, until they notice something peculiar about him. Clancy had no belt! He was born completely black and from that day on, all the other Belted Galloways would make fun of him for being different. However, they were also being bullied by the Herefords, the cows who lived on the much greener side of the fence. Every year the Herefords won the Cow Wrestling Contest, giving them the rights to the better pasture for a whole year. But that was why they always won, because they ate the best grass and were bigger and stronger than the Belted Galloways. It was a horrible cycle to be stuck in. Until one day, Clancy discovers that, at night, he can sneak into the pasture and not be seen because he had no white belt on his hide! The Herefords could not see him in the dark and so, over time, Clancy grew to be big and strong. He entered the Wrestling Contest and won! Afterwards, he suggests a change: that the cows all rip down the fence and let everybody eat the grass together.

Element 4: This element focuses on social movements and change. Where Clancy lives, his herd is being denied the better pasture grass. It is greener and healthier, which can be seen in the way that the Herefords (who eat it every year) are bigger and stronger than the Belted Galloways (Clancy's herd). Because they cannot eat this grass, they are skinnier and not as strong. The book even describes this as a "vicious cycle" of oppression and injustice. Clancy is just one cow, but he discovers a way to get stronger so that he might one day be able to help his herd. He meets another cow named Helga from the Hereford herd and together they work hard to challenge the annual winners. They work together towards challenging and changing the injustice that is present. Clancy gets strong enough that he wins the competition and by doing so, allows all the cows to share the healthier grass equally no matter what they look like. This book can be taken also as a commentary on racism when Clancy says, "Black, white, or brown, we are all cows. I say we pull down the fence and be cows together." In the end, it teaches the kids that even the most unlikely person can make a change by just standing up for what they believe in.

Activity: I would have the students take part in an activity I would call "Think Like Clancy"

Have the students sit in a circle. Randomly pass out red pinnies to half of the kids, and green to the other half. Pick which color will start and give one of those children a ball. Have them begin a game of Hot Potato and turn on music. Have them freeze when the music stops (just to make it really fun). But here's the catch: you can only pass the ball to someone wearing the same color as you. So, one color will be completely left out.

After the game have the kids take off the pinnies and ask them the following questions:

How did you feel playing/not playing the game? Why?
What do you think of the rule that _(color)__ pinnies can't play? Is it a good rule or a bad rule? Why?
Is it right that they can't play the game? Why/why not?
If you were thinking like Clancy, what would you do?
Would you change the rule? How?
Would this make the game more fun?

You could play the game again the new way if you wish to show the children the difference from before and after.

This activity will help the children understand discrimination from both sides. Then, they can see how by including everyone (which will hopefully be how they choose to change the rules) can change things and bring about equality.
Posted by Unknown